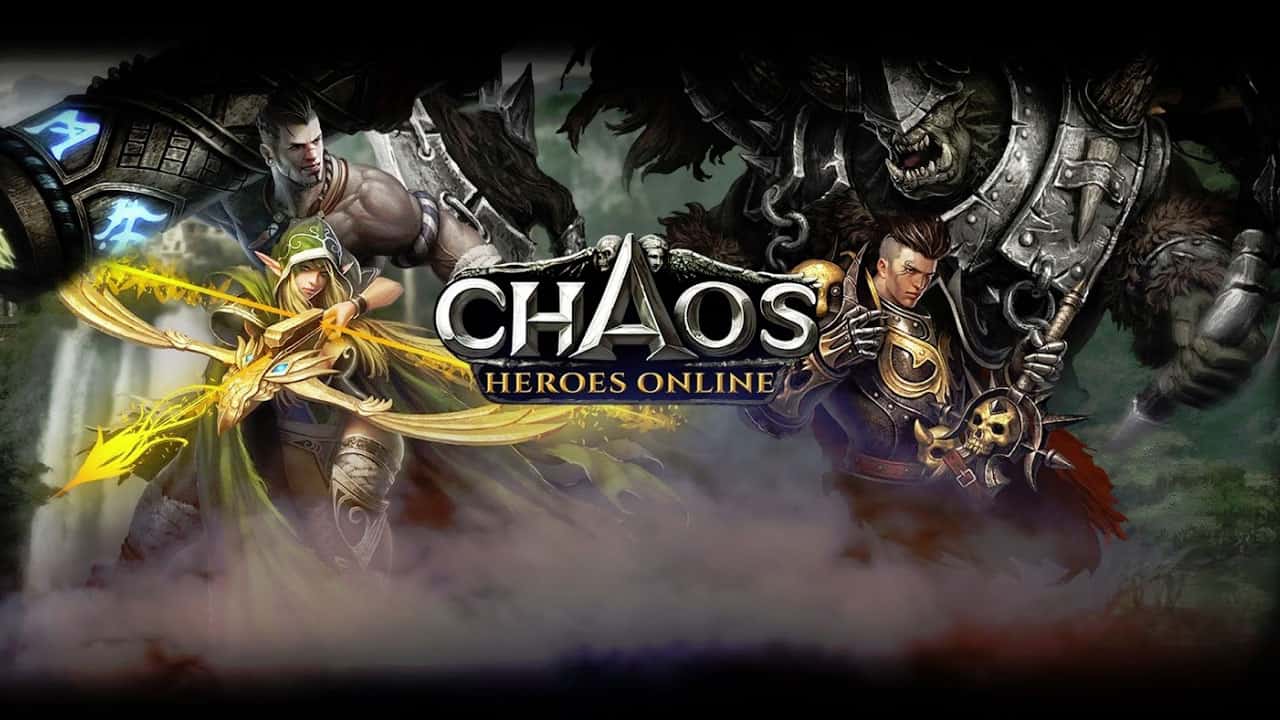 *Note* This is an extract from game documentation, not genuine editorial content from MMOAttack.[heading]Differences Between Other MOBAs[/heading]You’re probably wondering how CHO plays compared to your  favorite MOBA (LoL, Dota 2, HoN, SMITE). Here are some of the main differences that you’ll find as you play through Chaos Heroes Online.
1. You can buy items everywhere on the map, you don’t have to back to shop.
2. Consumables are super important. Just imagine you got BKB or Morgana’s Black Shield for 70 gold. Use Repel Potions, use Dispel Wands to counter it, use Vampiric Potions during fights, etc etc etc. Use these consumables!
3. CHO punishes passive farm play. You’ll notice that there are only 3 creeps per wave… and there will only be 3 creeps per wave during the entire game! If you want to earn more gold you need to contest jungle camps and gank.
4. CHO promotes grouping up. Towers regenerate over time, and each lane is protected by a huge monster that deals insane amounts of damage and heals extremely fast too. Taking it down usually requires at least 3 or 4 people.
5. You can attack trees. That may sound irrelevant but you can actually surprise enemies by running “outside” the map and ambush people on their way out to the lane. There are also teleportal portals linking bot / top lane, use those to surprise your opponents.
6. NO WARDS! Keep an eye on that minimap and communicate with your allies. VOIP is included in-game already.
7. You can instantly TP away with invulnerability (default Z key) with a 5 min cooldown. This may seem like a “get out of jail for free” card at lower level (and to be honest, it pretty much is), but the more experienced the enemies are the more they will capitalize on this. Think of it as keeping track of your opponent’s Flash cd (LoL) or Relocate cd (DotA).
8. 50 minutes time limit. No dragging the game out, after 50 minutes each team will have a score depending on their number of objectives (towers, sentinels, barracks…), kills, collective levels, etc etc.

[heading]Out of Game Progression[/heading]Chaos Heroes Online Currency (three types)
Game Points (GP) – Game Point is the in-game currency. GP can be earned through playing, completing quests, as random rewards and during events
Cash Points (CP) – Cash Point is the cash currency.
Soulstones (SS) – Soulstones are an extra currency that have various use. They can notably be used to play a hero you don’t own (1 Soulstone) or reroll a craft item’s bonus.  Soulstones can be earned through logging-in (one per day), completing quests, as random rewards, during events and through the shop (with CP).

Earning In-Game Currency
Chaos Heroes Online brings a lot of daily quests to earn currency faster.
Daily Target – The Daily Target is not a “quest” per se, but it works just like one. It resets every day and gives rewards based on overall EXP earned and Wins. These rewards can be cumulated (you can redeem each tier).
Note: Win condition only works in Matchmaking and not in Custom Games, but EXP condition works regardless of the EXP source.
Daily Quests – Daily Quests have to be selected to be active (they are not active by default) and you can only select one out of three “Instructors”. Daily Quests have different stages, completing one and redeeming the reward allows you to go start the next one. Completing all the stages net you an additional quest reward. To select your daily quest, click on “Accept Quest” above the instructor’s image. You can also abandon the quest if you desire to select another one instead.
Hero Quests – Hero Quests are more like Achievements than Quests. Every time you jump into a game, you will automatically have a Quest displayed on the side of your screen depending on the hero you selected. Completing it will give you some minor reward and will jump to the next stage the next time you select the same hero. These quests do not reset.
Level-up Quests (Quest Map) – Leveling up will grant you a hero for a temporary duration. You can activate the hero by going into your inventory and using the hero icon. You will then be able to use the hero for free for 3 days as if you owned it.
These Quest rewards are here to let new players try out heroes for free without having to wait for the weekly hero rotation. The rewards are still getting tweaked at the moment, which is why you may receive temporary heroes even though the hero is actually free.

[heading]Crafting[/heading]Crafting is a focal point of this game. If you’re familiar with the MOBA genre, think League of Legends Rune system where you can get small bonuses here and there.
Acquiring Items – There are several ways to acquire items:1. At the end of each game (even custom games / bot games).2. Random rewards (quests, boxes, etc etc…)3. Events4. In the shop (only with in-game currency, not cash currency)
Note: You can buy items (and choose the rarity) directly in the Item Info tab.
How do they work? – Basically, each item you drop correspond to an in-game item.
For instance, let’s say we have an item called “Power Ring” that gives you +10 Strength for 1000 gold. You drop a magic version of “Power Ring”, and it rolls “+1 Agility”. Now, every time you buy the item in-game, it will cost 1000 gold but provide you +10 Strength AND +1 Agility.
How to use them? – After acquiring an item, go to your inventory and use it. The item will now appear in the “Crafted Item” tab. If you multiple instances of the same item (for instance “Power Ring” with +1 Agility and “Power Ring” with “+1% Magic Resist”), you can double click the one you wish to equip in the “Crafted Item” tab.
Rarity – Items can be Magic, Rare or Epic. Magic items have 1 bonus stat, Rare items have 2, Epic items have 3.
Upgrading an item – In similar fashion to LoL’s Rune Combiner, you can upgrade your Magic items into Rare items, and Rare items into Epic items (Inventory => Crafted Item => Craft).
You will need 5 items of the same rarity and some in-game currency.
Unlike the Rune Combiner, what you use to craft will influence the resulting item. In the previous example you can see that I put “Assassin’s Boots” twice, so I will have 40% chance of obtaining an upgraded “Assassin’s Boots”.
The new bonuses however are completely random, so having 5 items with +Strength does not guarantee that the upgraded item will have +Strength as a bonus.
Rerolling an item – If the item does not have the bonus you want, you can reroll it (Inventory => Crafted Item => Reset).
You can reroll an item up to 5 times, with the cost increasing each time: 1 – 2 – 4 – 8 – 16 Soulstones.
The cost is the same for all rarity.
De-crafting an item – It is heavily advise against de-crafting items, as the reward ratio is very low. You should only use this option if you have too many items.
De-crafting a magic item will give you 1 Crystal of Chaos, a rare item will give you 4 and an epic item will give you 15.
Combining 25 Crystals of Chaos will grant you a Mystic Essence containing a random item of a random rarity.
Balance – Similar to League of Legends where a level 30 players has an overwhelming advantage over a level 1 player due to runes and masteries, this system relies on Matchmaking to prevent large gaps in equipment as well as skill between players.

[heading]Attribute Cards[/heading]Before the start of each game, you can select
an attribute card which will increase the stats of your hero.
Acquiring the Attribute Cards – Cards can be obtained through:1. Random rewards (quests, boxes, etc etc…)2. Events3. In the shop (in-game or cash currency)
How do they work?  – Cards come in three different packs: Intelligence, Agility, Strength. For example, buying the Strength pack grants you all three Strength Cards (you don’t have to buy it multiple times to get the Card you want). Cards Pack will last 30 days.
Selecting a Card will decrease your starting gold. At the moment, the game wrongly states “Cost 200 gold” when you don’t have a card and “Cost 120 gold” when you equip one. What it should show is “200 extra starting gold” without card and “120 extra starting gold” with a card.
Will these cards be expensive? – The Card Packs will not be as expensive as filling up an entire rune page and can probably be acquired in two / three days or even less if you complete the daily quests. We want these cards to be easily accessible to all players.