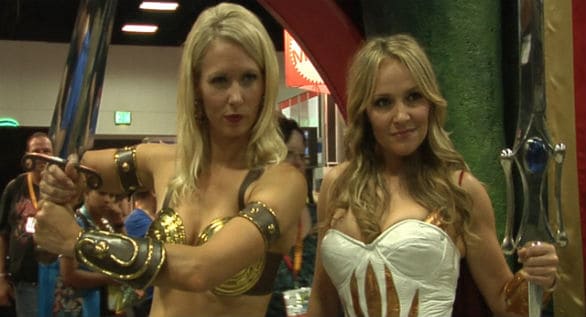 Not really something that’s exclusive to MMO games but after a recent chat with friends I was quite surprised at the differing opinions they offered on the subject of cosplay. For those that are unaware, cosplay is the art of designing and imitating characters from video-games, anime, and pretty much any other form of electronic entertainment. There’s a huge variety of different cosplayers with some choosing to design the entire outfit from scratch while others grab one from their local fancy dress store.

Sadly living in England there’s not really much of a large gaming scene. Obviously there’s thousands and thousands of gamers but outside of the EuroGamer event, there’s very little here that hits mainstream media. I was lucky enough to attend last years EuroGamer and I don’t think the experience would have been the same without cosplayers in attendance.

I caught up with characters from Pokemon, Metal Gear Solid, BioShock, Tomb Raider, Resident Evil and practically every other popular game at the time. I can’t really explain it in words but there was something really inspiring about the dedication fans had towards the characters they portrayed. Some even went the extra mile and worked on imitating a voice or certain action.

In short, I don’t think any large-scale game event would be the same without cosplayers. However, many of my gaming friends consider it to be really sad. I can’t understand why. They spend hours making a costume, or at least invest some hard earned money into it, and it’s something they enjoy. What’s wrong with that?

How do you feel about cosplayers? Is it something you’ve done yourself? Leave a comment and let us know. Also, check out our very own Reina as Street Fighter’s Chun Li at this years WonderCon