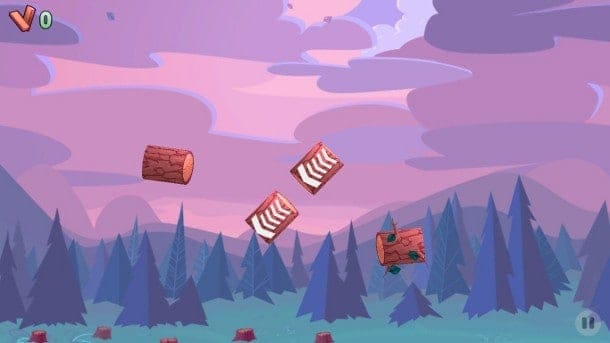 Today, we’re going to shift gears a bit and profile something just a touch simpler. This week’s Indie Game is called Jack Lumber; it’s developed by the same fine folks who brought us Snuggle Truck. Jack Lumber is, at its core, a game about chopping wood. That might not sound all that exciting, true…but neither does cutting apart fruit. Fruit Ninja, anyone?

To be honest, that was the comparison I kept making while playing through the game- though there are a number of mechanics that separate the two titles from one another. When all the logs are tossed up on the screen, the player holds down ‘shift’ to slow time. At this point, the wood-cutting begins; this involves using your mouse to draw a line through each log to chop it apart. There are several different ‘types’ of logs, each one requiring a specific cut to break apart. a cross-shaped log, for example, will require you to chop first down, then across. Missing a log or cutting it in the wrong fashion will cause it to fall listlessly to the ground; you won’t get points for it as a result.

Logs can also be ‘chained’ together if you manage to chop them in one continuous line. This provides a hefty bonus to your score, so it’s something you’re going to want to do as often as possible.  Of course, there’s a bit more to it all than this – but I’ll let you figure out that part on your own.

Towards the end of each stage, an animal will be tossed up into the logs. Letting your mouse touch it will give you an instant game over, and force a restart. Avoid it, and you’ll complete the stage. The furry little critter will be equipped with one of three different ‘types’ of banners based on your score: Bronze, Silver, or Gold. At that point, you’ll find it back in your cabin. I’ve yet to figure out what purpose these animals actually serve.

Completing stages (and ‘challenges,’ structured as “Granny’s Errands”) allows you to gain lumber points. These points can, in turn, be used to purchase upgrades, including new stuff for your cabin, special items to help you better chop wood, and new beards. It’s a fairly simple mechanic, and one common in these types of games.

In addition to the simple-yet-addictive gameplay, Jack Lumber has a rather amusing sense of humor. The whole premise of the game is that Jack’s granny was killed by a tree, which, taunting him, made its way off into the forest. Using his supernatural powers, Jack decides to go on a roaring rampage of revenge, chopping down the entire forest (but not hurting the animals!) until either the tree that killed Granny is firewood or no trees remain…whichever comes first, really.

I’ll admit, it’s not a game for everyone – if you’re looking for something with a bit more meat – an RPG or a roguelike – Jack Lumber probably isn’t going to float your boat. If, however, you’re looking for a simple way to waste a few hours, this one’s just the ticket. You can pick it up for $5 on the Steam Store. It may be simple, but it’s also masterfully done: a surprisingly deep, entertaining romp through a woodland filled with angry trees.