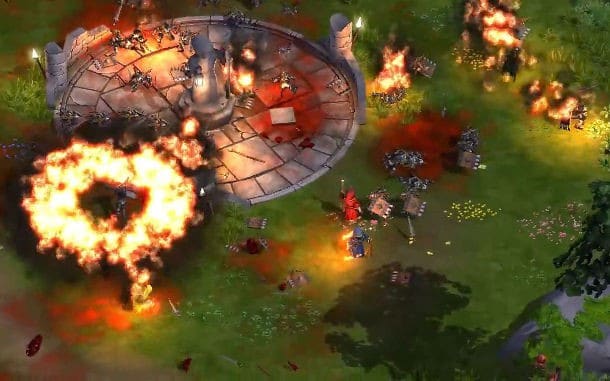 I’m trying to fend off a giant snake that can kill me with a single bite. So far, I’ve blown myself up about four times in a row, using a trick shared with me by someone else who plays the game – it’s called the ARSE bomb, named after the four keys that make up the spell. Oh, I’ve also detonated villagers, slaughtered my entire graduating class of mages, set trolls alight with meteors, and managed to explode a teammate with healing grenades.

This is Magicka, and if you’ve not yet played it, you’ve been deprived of something incredible. If I were to refer to it as one of the best indie games ever made – easily worthy of standing side-by-side with the likes of Amnesia and Cave Story – I wouldn’t be exaggerating in the slightest.

The story, as it goes, is simple. You’re a wizard, and part of a sacred – and extremely prestigious – order in a world inspired by Norse mythology. Your headmaster (who totally isn’t a vampire, by the way) sets you and up to four friends on an epic quest to defeat an evil sorcerer and his legion of terrifying creations. As high fantasy goes, the developers were extremely self-aware when developing the story for the dungeon-crawler; expect the game to comically poke fun at itself on more than one occasion.

Along the way, you’ll probably blow up each other on more than one occasion. You’ll probably light yourself on fire. You’ll probably drown, get eaten by trolls, get slaughtered by goblins, and get crushed by a giant demonic chef. At least once, you’ll intentionally crash your game to your desktop (there’s actually a spell called “Crash to Desktop.” I dare you to go for several hours without trying it at least once. There’s an achievement for doing so, by the way).

See, the most fascinating thing about Magicka is the magic system. You are equipped with eight different ‘base’ elements. Each of these elements can be combined with a number of other elements (and each element also has a natural opposite with which it’s often incompatible). In addition, certain combinations of elements can be used to craft devastating spells; these spells are discovered as you play through the game. One such spell – thunder – can ruin pretty much anything that isn’t in a cave if you’re quick enough with your fingers.

Since its release way back in 2011, the game’s gotten worlds better, through the inclusion of a huge array of different expansion packs which explore everything from the Vietnam War to the Cthulhu mythos. Oh, there’s also a veritable banquet of different player models, equipment sets, and challenges, as well. The most recent of these is Grimnir’s Laboratory; an arena which randomly locks elements for use.

Oh, just one thing to note. Magicka tends not to work so well on certain graphics cards, particularly mobile ones. Might wanna look up details on your card and setup to be sure that you won’t run into any potential problems while trying to run the game. Though my desktop can run it (relatively) flawlessly, my laptop can’t even look at the game without stuttering like a broken car motor.

Anyway, if you haven’t played it already, you should give it a try. It currently costs $9.99 on Steam.