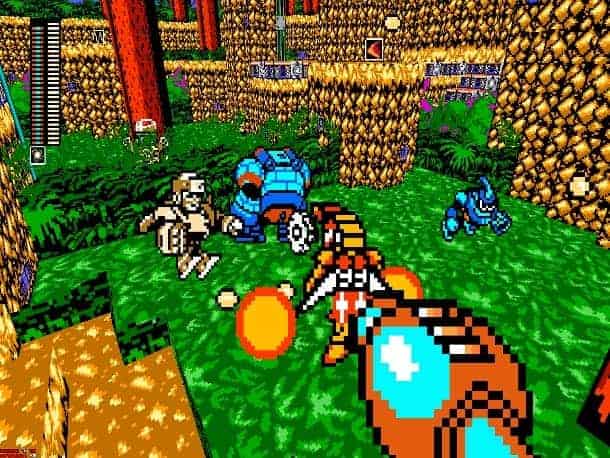 I don’t ordinarily deal with fan games, but this one’s caught my eye to enough of a degree that I simply have to discuss it. As I’m sure I’ve gushed before, the Megaman series is always going to hold a special place in my heart – it was where I discovered my love for gaming, after all. Were it not for that, maybe I would never have started in the first place.

I’m sure by now that you’ve all heard of Maverick Hunter, the cancelled Megaman X FPS. While I’m not one hundred percent sold on the graphics and design of the whole affair, it still feels like something of a shame that it never got off the ground. After all, a Megaman shooter would be friggin’ awesome.

It’s my pleasure to introduce you all to Megaman 8 Bit Deathmatch. The best description I can provide of the game is that it’s what you’d get if you were to take Doom or Quake, mash it together with Megaman, then pepper it with almost every single robot master ever seen in the series.

The end result is bloody awesome.

The game’s Story Mode takes place about a year or so after Megaman 6. Mr. X (the real one, not Dr. Wily) has decided to host a second robot fighting tournament, with one important caveat: every participant must be re-fitted with Megaman’s standard kit. Naturally, Dr. Wily jumps on the opportunity this provides him, and brags that he’ll prove once and for all that his creations are superior to Light’s. Your character is an unnamed robot – presumably one of Light’s later creations – who has been entered into the tournament in an effort to thwart whatever Wily’s got planned. As such, you can customize your character’s appearance…though you seem to be stuck with using a blue color palette, for some reason.

There are currently eight chapters in total (with more content likely on the way, as if that’s not enough). Each chapter consists of ten arenas, followed by a boss battle.  Again, the premise here is fairly simple: you fight your way through every arena in each of the eight chapters. In order to advance, you’ll need to be the first to 15 frags (20 in later stages). Once you’ve ‘beaten’ every stage, you’ll unlock the boss of that stage.

Here’s where things get really cool. Whereas the rest of the game plays out like a pretty classic Quake-esque shoot-em-up with around eight people to a match; boss battles pit you against a single, iconic foe from the Megaman series, such as the Yellow Devil or the Guts Dozer. They’ve been translated masterfully into 3D; they are, as a result, quite enjoyable to play through.

As you’d expect, matches are frantic, explosive, and extremely entertaining. Arenas are littered with both weapons and power-ups, though some are noticeably more effective than others(the power fist is particularly devastating, while slow time is fairly unimpressive). Sadly, I’ve not yet gotten the chance to try out the multiplayer, but I hope to find a server or two that’s still active very soon.

I’ll say one last thing about 8 Bit Deathmatch before signing off: it’s old-school in every sense of the word. If you’re not looking for a challenge, you’d best walk the other way. As for me? I’ve got some bots to frag.