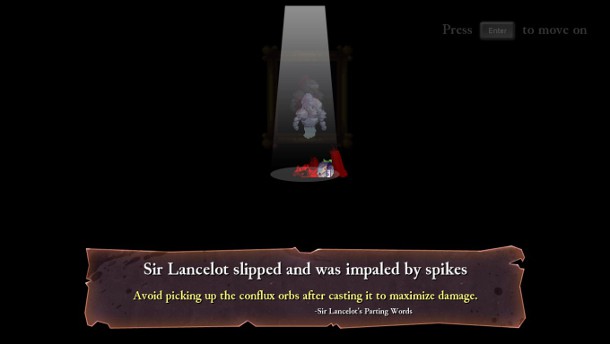 Roguelikes aren’t really for everyone. Matter of fact, they’re some of the most challenging games in existence, where a single slip can mean you’ve lost your character, coupled with everything they worked so hard to achieve. That’s where the entertainment lies, though – although they can more often than not be frustrating as hell to play, there’s something thrilling about the constant threat of death.

I’ll start by saying Rogue Legacy isn’t a traditional roguelike. Yes, it features randomly-generated dungeons. Yes, it incorporates permanent death. And yes, it’s incredibly difficult, at times. At the same time, though? It’s an addictive, fast-paced platform which even those of you who don’t care for roguelikes will probably enjoy; it’s just challenging enough to be fun, but not so challenging that you’re ever tempted to rage-quit.

It’s not unfair, in other words.

The story is pretty simple. At some point, a king was brought to the point of death by an assassin. A cure for this king lies within the ancient and evil Castle Hamson, guarded by the dread gatekeeper of the underworld, Charon. At some point, the crown prince entered the castle to search for this cure. Coincidentally, said castle also contains riches beyond measure – which is a good thing, because Charon demands every last coin you have as an admittance fee.

In hindsight, there’s a pretty good chance the gold you’re finding is just what he’s been given by all the other unfortunate adventurers who tried to brave the halls of the fortress. I suppose being death personified can get pretty boring. Gotta keep yourself entertained somehow, right?

Anyway, when you die – and inevitably, you will – you’ll have the opportunity to select one of three ‘children’ for your character. These children are of a random class (out of what you’ve got unlocked at the moment) and each one possesses either a single spell or a random array of spells(in the case of mages. Further, every character starts with one to several random traits, including gigantism, dwarfism, vertigo, stereo blindness, or irritable bowels. Some traits have a marked impact on gameplay (vertigo, for example, reverses gravity for your character so they’re forced to walk on the ceiling), while others seem merely for flavor or comedic value (irritable bowels. You fart a lot).

Each time your character dies, the layout of the castle will reset, and you’ll retain all the gold you collected on your previous playthrough. This gold is used to purchase new equipment and runes and upgrade your keep This will improve your stats, unlock new classes, unlock new merchants, or add new gameplay features(it’s basically just a stylized talent tree). Naturally, some characters are better than others – in some playthroughs, you’re basically going to want to get as much gold as you can before your inevitable death. Other characters are much more useful, to the point that losing them is potentially upsetting.

It’s worth noting also that there’s one aspect of your progress that is saved: whenever you defeat a boss, that boss is dead. No matter how much the halls of the castle warp and change, it won’t be coming back to life. There are a few other constants, as well. The Forest, for example, is always to the right, The Tower is always up, and The Dungeon is always down(you probably don’t want to head down there anytime soon). If you’re particularly keen on cheesing your way through the game, you can even pay an NPC named The Architect to lock the halls of the castle in place, so you’re presented with the same map every run.

Rogue Legacy is a positively fantastic game. The “legacy” mechanic is both unique and interesting, and the gameplay itself feels both polished and professional. If you’re in the market for a new roguelike (or simply another platformer), give this one a try – it won’t disappoint. One thing, though? Use an Xbox controller. The keyboard’s not so great.