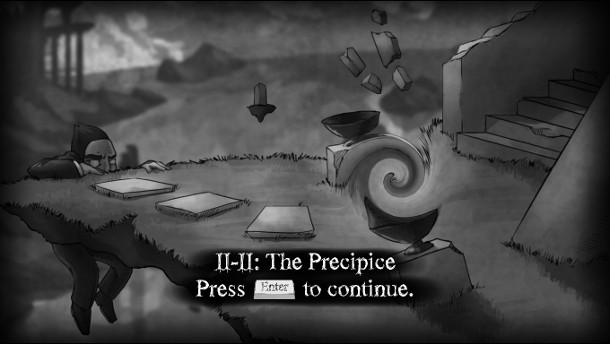 Hey there, folks! It’s once again time for something a little different. In this edition of Indie Game of The Week, I’m going to be reviewing a title a little bit less horrifying than A Machine For Pigs, and a touch more sensible than Dino Crisis. Today, I’d like to bring your attention to a lovely little logic puzzler known as The Bridge.

The Bridge is one of those ‘artistic’ indie games that’s becoming more and more common these days. The color palette is entirely grayscale, the soundtrack is minimal (but pleasing). Lastly, the plot, though not overly complex, is wonderfully crafted and contains a great deal of symbolism; the hand-drawn graphics are reminiscent of Braid.

Truth be told, a lot of stuff about The Bridge seems to be at least in part inspired by Braid. Like Braid, The Bridge is a quirky puzzle platformer, with at least one rather familiar mechanic: if you mess something up terribly enough, you can hold down the space-bar to ‘rewind’ time, going as far back as you’d like – even to the beginning of the stage, if you so choose. That’s where the similarities end, however. You can’t stop time, nor can you fast-forward: time’s not the primary focus here – gravity is. The Bridge bills itself as Isaac Newton meets M.C. Escher, which is actually a rather apt description.

The primary mechanic of The Bridge is centered on the manipulation of gravity. In order to progress through the impossible architecture that peppers the game’s levels, you’ll have to ’tilt’ the stage, changing the direction of the level’s gravity. Complicating this matter is everything from reversed gravity to parallel dimensions to black hole-like vortexes to a series of demonic boulders referred to only as “The Menace.”

The puzzles, while they start out rather simple, rapidly become more complex, and by the game’s mid-point, there’s a real sense of accomplishment gained in solving them. What I’m trying to say here is that eventually, you’re going to have to start thinking your way through things, rather than just putzing around until you find something that works. This is a logic game, after all.

It’s definitely not a game for everyone – I’ll readily admit that. If you’re the sort who enjoys puzzlers, though? This one’s gonna be right up your alley. That goes double if you played (and enjoyed) Braid. You can pick it up on Steam for $14.99