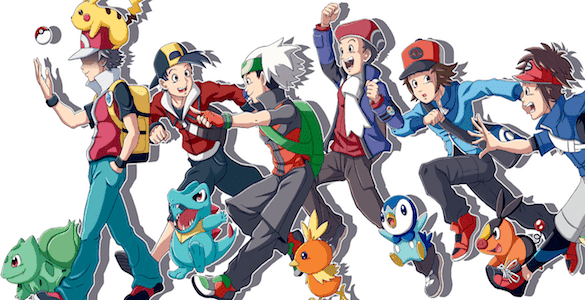 In last weeks Making a Pokemon MMORPG, I discussed how leveling your favorite critters would work in a massive setting. With all of the focus on leveling your team of pokemon over the years, there hasn’t been much innovation on building a unique trainer. Taking the classic RPG to an MMO level would be the perfect opportunity to finally provide unique character development in Pokemon.

An MMORPG for Pokemon would run under a different paradigm than past games. You may be able to name your pokemon trainer, choose your gender, and even be dedicated enough to change the color of your trainer card. There is no real level of customization though when it comes to playing a Ketchum-esque protagonist. Fans are sure to see some changes in the series eventually, but they have waited long enough. It?s rare to find an MMORPG without customization options for your character. The mere creation of this game would give fans something they have probably always wanted, even if they?re complacent with the amazing accomplishments in the series thus far.

It?s not just about the esthetic character qualities though. There need to be goals and accomplishments for characters so that players will be distinguished by more than the pokemon they use. The most important aspect to look at in trainer development is the ability to level on a distinctly separate scale than their pokemon. Trainer levels have never existed, but it shouldn?t be difficult to implement them. Trainers can range from level one to ten, unlocking changes in their gameplay along the way. Nintendo would just need to figure out how to allow trainers to achieve these levels though.

One idea would be to improve characters as they catch more pokemon. It?s odd but the original Pokemon games actually stress the ?Gotta Catch Em? All? mentality very poorly. Professor Oak clearly asks you to fill his pokedex with as many creatures as possible. Instead, players could realistically fight with one creature, while only needing others for their abilities outside of battle.

Why not bring back the mentality that made Pokemon famous in the first place? Get players to once again feel the desire to seek out those poorly apt rejects like Paras and Farfetch?d. It’s hard to believe that Nintendo would want to stifle the reincorporation of their old ideasl especially considering the uniqueness of each pokemon,

Another idea involves the massive online gym system, which will be discussed in future weeks. Let?s assume for now though that players are to collect gym badges. It makes sense. The Pokemon RPGs set you on a path of town-to-town gym battles so you can march your way to the top of the Pokemon League (which I guess is the most important thing in that universe). Regardless of the reason, players must beat these renowned gym leaders in order to have their pokemon obey them in future battles. Moreover, gym leaders allow you to use certain pokemon moves (Hidden Machines) outside of battle, which just so happens to be a necessity in overall game progression.

Imagine these moves being utilized in a vibrant, fully detailed MMORPG setting. Whether it?s cutting though blocked paths, using strength to move large objects around, or lighting up a dark cave with flash and seeing those million Zubats; the experience becomes more real. There are even more innovative ideas to implement; such as an increased number of pokemon you can carry, an increased number of moves learned by each pokemon, and of course mounted travel. Not only would mounted travel on your favorite pokemon be a great goal to strive for, it would logically make more sense than being handed a million dollar bicycle just for listening to and old guy rant about his Ponyta.

All of these things relate right back to your character, and not the actual pokemon they use. Players would even have unique IDs keeping them from abusing experience gain by fighting the same people over and over again. Repeated fights on the same players will lead to less experience. The more you venture out and meet people the more experience chain you will get.

Some aspects of integrating pokemon trainer levels will be difficult, but most seem fit for the MMORPG community. The question is, do you agree? Let us know your thoughts below. This is just the first wave of ideas related to character development. Remember to check back with MMO ATK next week when I discuss the obvious desire for character professions in a massive Pokemon universe.