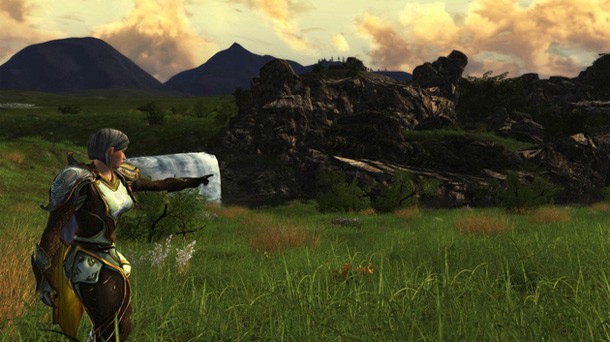 I don?t really play MMOs. In fact, it?s rare I play multiplayer games at all. The reason for this (aside from me being a weird loner) is that one of the core things I look for in my gaming experiences is a solid, engaging narrative. I look for games that set a tone and immerse me in an interesting world, providing characters with developing arcs. I do, however, also appreciate games based purely on their mechanics, meaning I enjoy the occasional first person shooter deathmatch and I?m still always game for a bout of Super Smash Bros Melee. In other words, I enjoy these games for essentially the complete opposite reason I enjoy a game with a good storyline; I don?t have to invest myself too deeply in them. It?s only taxing on my eye-hand coordination.

But MMOs seem to fall into a strange middle ground. With their vast settings and characters that can be developed almost limitlessly, they count on the player to be heavily engaged, ideally for months or even years. However, the nature of a massively multiplayer game generally requires a flexible, nonlinear storyline that can withstand the simultaneous inputs of a multitude of players and their interactions with one another. Furthermore, a title expressly centered on leveling up characters on and on doesn?t exactly lend itself to quality character development in the narrative sense of the word. I mean, most stories have a beginning, middle, and end, but there?s no guarantee of an ending in many MMOs and you?d be hard-pressed to point out where the midpoint is.

As a result, from my perspective I see no compelling reason to get involved in an MMO. But I wondered if this wasn?t perhaps a bit shortsighted of me, so I bothered a friend of mine, Keran, an avid player of MMOs whose name, yes, is actually spelled like that, questioning him at great length about what draws players to this genre, whether the notion of a story is a concern or not, and if MMOs could possibly be improved by more sincerely introducing narrative elements. What follows are my findings on the matter.
It seems likely that, generally speaking, story is not of paramount concern to MMO players. In most MMOs, there is the initial setup of the game?s world, races, classes, and systems, but the only ?story? that gets built onto that are loads of text boxes informing you of quests, all of which are effectively MacGuffins as they?re arguably just irrelevant backstory (?I need a new fur coat, but it?s too dangerous out there!?) to justify telling you to go kill ten bunnies or whatever. It?s quite likely that most people skip past these without reading them at all.

To pretend like these chunks of text contribute to a larger storyline would be ridiculous. If you were to, for example, try and piece together a story from all the text boxes of the thoroughly ginormous World of Warcraft, you would get a convoluted mess about flower-picking, orc-killing, fur-coat-tailoring madness. Some time back I had been looking into writing jobs for different game companies and found that those that produced MMOs were forever looking for quest writers in a need to have people churning out endless paragraph-long excuses for you to go out and bump up the numbers on your character screen.

The obvious draw of MMOs, then, is the addictive notion of progression, of completing quests for money, XP, and items so that you can afford better gear and unlock more advanced quests. The mechanics involved in performing these tasks can also be unique and interesting. Still, considering the amount of time one can potentially put into an MMO, its atmosphere is certainly important to some extent. Each MMO has its own setting and some make more of an effort to immerse you within that setting, something which makes a significant difference to some players if not others. One obvious way to do this is to further develop the goings-on of the world or, in other words, to introduce more narrative.

One of the earliest MMOs to attempt this was Asheron?s Call. Every month developer Turbine Entertainment would release a new pack that didn?t just include more quests, but actually added onto a continuing storyline about the world itself. It was received well critically and was perfect for those players (like my friend Keran) who craved story arcs. However, it was still more about a world growing and changing around the player regardless of his or her input.

More recently, BioWare?s Star Wars: The Old Republic strove to present stories of a quality up to the level of their single-player releases. This meant presenting a story more personally oriented to the player. From each player?s perspective, major events only take place once the player has set them in motion. Solidifying this experience also meant a literal Guinness record-breaking amount of voice acting in place of the common mute text boxes, as well as cut scenes with dialogue trees straight out of Mass Effect.

Similarly ambitious is Funcom?s The Secret World, which, following in the footsteps of director Ragnar T?rnquist?s The Longest Journey adventure game series, features recorded dialogue for every story-based quest and most side quests as well, not to mention surprisingly long cut scenes. The game arguably embraces its MMO side a little better than The Old Republic as your character is, as in most MMOs, silent and a reason is even given so as to justify it narratively (you? er? swallow a bee). Perhaps further driving home the idea of you, the player, being the one in this world are the inclusion of ARG elements which require you to occasionally venture to Google for answers to puzzles. Keran mentioned one puzzle he particularly enjoyed where there was a Morse code message playing. He recorded it into his phone, and then played it back into an online translator. In his estimation, this was really awesome, but he also spoke with many players who believed that having to explore the world wide web for solutions was annoying and took them out of the game (literally, I suppose).

Most recent of all is Defiance, which is story-heavy, probably largely because it?s a tie-in with a new Syfy show of the same name. Something particularly interesting is that, before the show began, the game contained missions that included the show?s characters (voiced by the actors), but that, since in the show they moved on from the game world into a different area, those missions have been removed from the game entirely. This has annoyed some players, but returns again to the model of a persistent world that moves on despite your involvement.

Of course, the question here becomes what is the purpose of providing a single-player-like experience in a genre devised almost expressly around the concept of providing a world to play around in with other people? There are certainly some benefits of presenting a very personal storyline in an MMO setting, though how worthwhile the returns on these are is subjective.

First, there?s the inclusion of group quests in an otherwise personal narrative, allowing, in The Old Republic for example, cut scenes in which any member of your group might contribute to a conversation. However, The Secret World only shows your character in mission cut scenes, so the storyline doesn?t seem particularly affected by group play in this case.

Two, the persistent world makes for stories that will ostensibly be added onto until the game ceases to be profitable. For some, this would be a great incentive to play an MMO. However, as I?ve explained before, to me, a seemingly endless storyline (regardless of whether certain missions feel kind of climactic) will probably never achieve the satisfying sensation of a story with a definite ending.

Three, the vast worlds and numbers of players in an MMO drives home, perhaps better than any other genre can, the feeling of being one of many. It?s true that some single-player games (like the earlier Call of Duty titles) go for this concept too, that you are one person fighting one battle in a much more grandiose conflict. However, there is still this rather unshakeable sensation like you are just some incredible force of nature who singlehandedly wipes out the bulk of Germany. MMOs surround you with real people, many of whom (either because they?ve been playing longer or, in many F2P cases, because they?re rich and lazy) are actually more powerful and/or capable than you. If it?s the humbling concept of being one small element in a world of many that attracts you, MMOs are certainly the way to go, even more so if it?s a world that continues on with no concern for what you?re personally up to.

This does, however, again raise the question of what the purpose truly is of trying to present an almost single-player-like experience in a world of cooperative questing? One might argue that it?s more important to evolve the world rather than the player?s personal story. As it is, some of the most rewarding narrative experiences in MMOs seem to be those that the player can develop for himself. Keran noted that some of the best ?story? that came out of an MMO for him was on a PvP server on Asheron?s Call. People split into factions that then occupied different towns. At times fights would break out between members of the different groups. This led to a narrative of rivalry and revenge, manufactured completely by the players and altogether independent of the world story provided by the developers.

It would seem that more effort is gradually being put toward providing more solid stories in MMOs, often by giving them something of a single-player flavor. And it is worth noting that certain single-player games?RPGs like The Witcher and Xenoblade as well as the single-player modes of Borderlands and its sequel?have adopted mechanics and level design clearly influenced by MMOs (though Borderlands does perhaps feel as though it?s truly meant to be played with others). Perhaps there?s a happy medium between the two that could result in an incredible storyline only possible through an MMO setting. But, as of right now, to my mind, the most interesting types of stories an MMO can produce are those conjured up by the players themselves. Still, involving multiple people in one story is a concept that continues to feel as though it has untapped potential. As of right now, however, I have to admit I still have my doubts that any story in a nonlinear, persistent world, multiplayer game is going to oust a tight, linear, single-player experience like Portal.