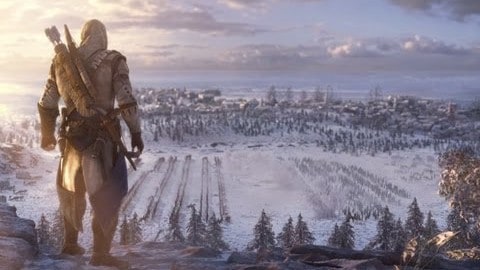 GDC is getting in gear and there’s so much cool stuff that I can’t possibly contain it.  So, here’s some highlights from the non-MMO announcements.

Following a leak, Ubisoft came out with the news on Assassin’s Creed III, the 5th installment in the Assassin’s Creed franchise for consoles.  It will be released for the PS3, 360, PC, and Wii U on October 30th.  A trailer has been released from GDC, embedded below for your enjoyment.

After Bungie’s passing of the Halo torch to 343 Industries, fans have been waiting for something big to come up.  Halo 4, announced at E3 2011, will be the start of a new trilogy and will continue the Master Chief’s story from Halo 3.  There’s a ViDoc that explains some cool stuff about the game, but wait…is that some gameplay I see?!  IT IS!!!!  Check out the ViDoc here for some Halo 4 Gameplay!

Oh, Fable…you’ve been caught in a strange pickle.  I really don’t know what to say about Fable Heroes.  It’s like Mario Party meets LittleBigPlanet’s art style in the Fable universe.  I guess it COULD be a fun game, so I won’t judge it yet, but it hasn’t made a great first impression.

So that’s pretty much it so far for announcements, but there will be more tomorrow and later today.  We’ll keep you updated on what’s going on.  What games do you wanna hear about?  Leave a comment!