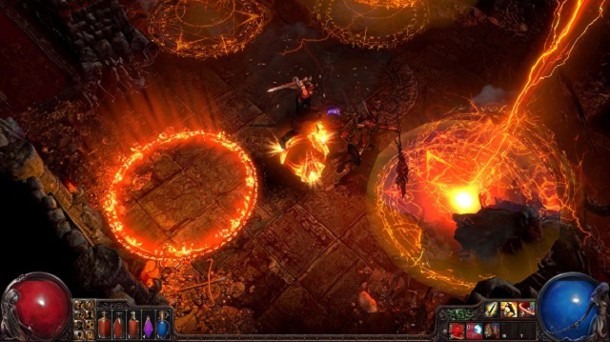 Earlier this month, Grinding Gear Games released the first official mini-expansion for Path of Exile, titled Sacrifice of the Vaal. The story, as it goes, is that Queen Atziri – the cruel monarch who originally led the long-dead Vaal civilization to apocalyptic ruin – has decided it’s high time she return to Wraeclast. Naturally, the corrupt queen has brought with her a whole host of terrifying new minions, powerful artifacts, and dangerous, vile dungeons, all of which are ripe for the plundering.

As you might expect from a developer like Grinding Gear, this expansion isn’t one for the faint of heart. There’s something around sixty new bosses, all with their own unique attack patterns, tactics, and abilities. Of these new bosses, there isn’t a single one that could be considered even remotely easy. Of course, the rewards you can potentially unlock by triumphing over the Queen’s deadly minions are well worth the risk. Not only do you unlock fragments of an artifact which will eventually allow you to challenge Atziri herself, you’ll also gain access to a sweet selection of unique (and ultra-rare) Vaal items, which include both incredibly powerful skill orbs and the new Vaal Orbs.

At a glance, the former isn’t really all that special. Most Vaal Skill Gems are basically super-powered versions of skills already available within the game (though there are a few unique gems scattered about that could give you access to new and exciting abilities). It’s the Vaal orbs which are truly fascinating. These lovely little relics can be applied to player items in order to grant them a host of powerful and special modifications – the trade-off being that they’ll be impossible to upgrade or modify further.

Sacrifice of the Vaal also adds two new game types – Ambush League and Invasion League. In Ambush League, Strongboxes will be scattered throughout Wraeclast, guarded by a cadre of powerful monsters and containing powerful artifacts. Invasion, meanwhile, will occasionally plop down monsters from other acts or zones into lower-level areas. Ever wanted to fight an Undying Aristocrat in Act I? Invasion might give you the chance to do just that.

The culmination of all this new stuff can be found at the Apex of Sacrifice, the stronghold of Queen Atziri. It’s a zone that makes the Sceptre of God look like a complete and utter walk in the park. Although the Apex will be filled to the brim with rare drops, it’ll also be overflowing with powerful, rare monsters and bosses. Even if you survive that hell, you’ll end up face to face with Atziri, who makes Dominus look like a bumbling pushover. I’ll spare you the details, and simply leave it at “she’ll probably make you cry tears of pain and frustration.”

Oh, have I mentioned that you’ll only get one crack at the Apex of Sacrifice? If you’re running it as a party, death means you’ll wind up resurrected outside the dungeon. Same deal if you’re doing it solo – you’ve got six lives to spend before you’re locked out altogether, and forced to seek the Apex all over again. It’ll all be worth it in the end, though: Grinding Gear will offer unique rewards to the first fifty players that kill her. At the time of writing, only 18 have managed.

Besides that, Path of Exile remains an incredibly well-made, high-quality hack and slash. If you still haven’t played it, you need to do so. Otherwise, you’re missing out on one of the best dungeon-crawlers ever released – and one that just so happens to be free, at that.