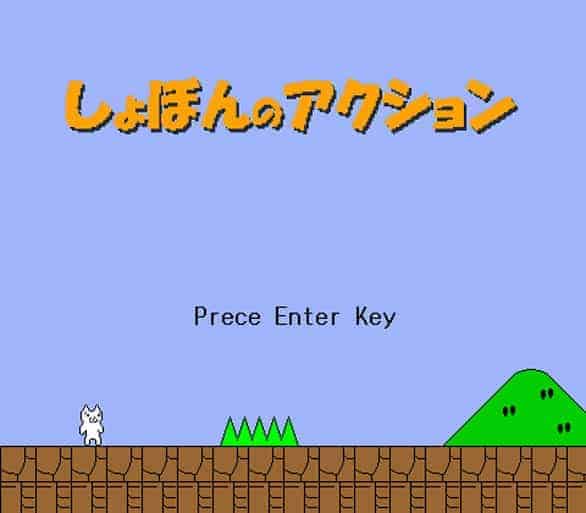 So I’m not sure where I found this game, or why I even pursued it, but let’s just say it has ruined my day.  This is one of the most frustrating games I’ve played in a long time and as I type this I am still fuming mad.

Cat Mario is a 2D Japanese platforming game that looks and feels like Super Mario Bros.  The game was released in 2007 and has a few names, probably because of the translation.  Some people call it Syobon Action or Neko Mario.  The game is free to play, or rather, free to ruin your day by increasing your level of infuriosity (new word, add it to your dictionary).

Basically you’ll control a friendly kitty cat like character.  He doesn’t have a name, that i’m aware of, but by the time you’re finished playing you’ll want to call him any number of expletives.  The game consists of four levels, although I never even made it past the first one, with all sorts of traps that are designed to trick you.  You will find hidden blocks, power-ups and spikes, angry clouds, mean lasers and something to fuck your day up around every corner.

So if you’re not convinced already, then I would recommend giving Cat Mario a try.  You can find it on any number of free to play websites but i’ll link to you were I found it first.  Also there are many YouTube videos of people playing Cat Mario and getting extremely frustrated, which are quite funny to watch.
[play-now=http://games.337.com/en/gameplay/cat_mario_]Play Cat Mario[/play-now]