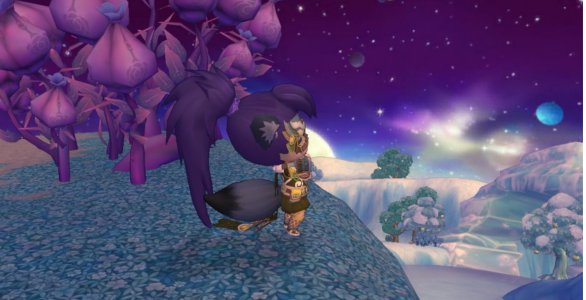 Q: So can you tell us about your position at Koramgame.com?

A: Of course! I?m Elliott, the Community Manager for KoramGame?s US office. Basically I?m in charge of all communications with players in all sorts of avenues. Players can contact me via forums, Facebook, Twitter, and YouTube to discuss KoramGame and our newest client based MMORPG, Spirit Tales! I also organize and run all of the events and contests, whether it is in game, on the forums, or on our social network sites.

Q: Could you tell us more about Spirit Tales and the game play?

A: Spirit Tales is a cute, 3D, fast paced fantasy MMORPG that focuses primarily on the uniqueness of the individual player.  How big of a focus? Well, there are over 40 million different customization options, and last time I checked, that was a lot! We also have a vibrant world filled with amazing creatures and a unique horizon view that puts everything perfectly together. There is also Spirit Form, a gameplay feature that will be available during Closed Beta that lets you channel special attacks and unlock rare loot items that are only available during Spirit Form. There are also additional features, like PvP Battle Zones, Duel Tournaments, Pet Capturing/Morphing System, Massive Unlockable Achievements and Title Systems, and so many others that I could talk about all day. The funny thing is that this is just the start! We have so many other special features that you?ll just have to play the game and find out for yourself.

A: With Spirit Tales, North American and European players will have access to a closer server location, which means improved latency, less lag, and more responsive gameplay. We’ve refined the UI to make gameplay more polished, as well as more tailored to a North American audience. We’ve also removed some major UI functionality to make the game both more enjoyable and less exploitable.Although the core game remains the same, we?ll have a different update cycle that depending on the user base, we could take the game in different directions. We will also have an expanded customer service department, more events and active GMs, as well as more integration with social networks such as Twitter and Facebook.

Q: Which part of the game do you think the community will love the most?

A: There are so many things to love! My personal favorite is the emote system. Adorable dances, cute facial expressions, fashionable poses, you name it. I often find myself staring at the screen, cheeks BURNING because I can?t stop smiling at how cute these emotes are? and that?s with work to do too!

I think our most popular widespread appealing feature will be the Instance Queue system. We have so many dungeon instances that we have an automatic queue system in place that lets players find parties without having to hope for a random invite. Just choose your role, the instance, and BOOM, you?re in a party and ready to go!

Q: What can the players expect in the Closed Beta?

A: In Closed Beta, we?ll be opening all content up to level 40 to our users, absolutely free! This includes 5 instances, hundreds of quests, a bazillion pets, PvP Battle Zones, and more! Not to mention special closed beta rewards, custom titles, and achievements only available to testers during Closed Beta! Oh and of course events! We?ve got events that range from holiday celebrations, GM beat-downs, hide- and-go-seek, screenshot and video contests, and everything in between. It?s your chance to win awesome prizes that carry over to Open Beta.

Q: Could you tell us more about Spirit Tales ?Spirit Form??

However, this powerful transformation is only available for a limited time.  This is shown by your Spirit Bar, a gauge that refills by using skills in combat. Pressing the space bar transforms your character into an awesome animation and begins draining your Spirit Bar over time until it?s depleted, or when you cancel it by pressing space bar again.

Q: How does the Pet Morphing system work and what kind of abilities do the pets have?

A: Spirit Tales has a MASSIVE pet system. Every monster you see in the game world can be tamed! Each pet has a unique set of skills ? active and passive ? as well as unique stats and resists that accompany the special Morphing skills.

In Spirit Tales, you will be able to have 2 pets at your command; one to fight along your side and one to ?morph? with. Morphing with your pet gives you a special aura visible to all players, and imbues you with the strength of your pet. Pets like the rare Baka give you 3 morph skills, in its case; bonus defense, bonus agility, and bonus health. Other pets give bonuses to movement speed, cast speed, and many more. There are literally thousands of different combinations, so you can spend months deciding which pets create the perfect matches to fight along your side.

Q: Can you capture Bosses in the game to make them your pet?

A: Yes, but only while in Spirit Form. Battling enemies in Spirit Form damages another pool of points the monsters have. To explain; the main damage pools are HP (Health points) and MP (Mana Points),but this third pool, BP (Break Points), is only damaged while in Spirit Form. So when a monster?s BP is at zero, their defenses are lowered and special loot is unlocked. When you battle Bosses in instances or global events, you?ll have a chance to loot a pet egg of that boss when their BP has dropped to zero.