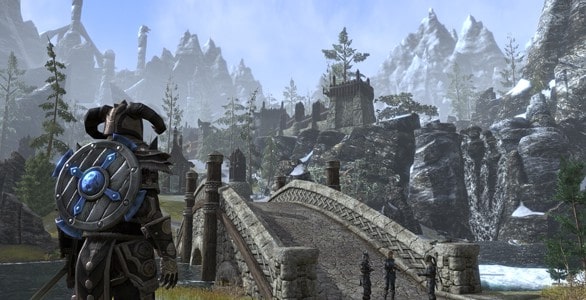 The developers of The Elder Scrolls Online today released a statement regarding the upcoming launch on next-generation consoles, the PlayStation 4 and the Xbox One. The next-gen console version of The Elder Scrolls Online was originally meant to be releasing next month but the statement released today states that is no longer possible and that it has been delayed indefinitely.

We know from the frequent questions we get that many of you are excited about playing ESO on
the PS4 and Xbox One, and today we’d like to share an official update
on the status of these releases. Read on for the latest information:We’ve been grateful to our fans for the wonderful response to our recent launch of The Elder Scrolls Online for PC/Mac, but we know many of you are eagerly waiting to play the game on the PlayStation 4 and Xbox One.

We continue to work on the console versions of ESO,
and game development has been progressing steadily, but we are still
working to solve a series of unique problems specific to those
platforms. Integrating our systems with each console manufacturer’s
networks—which are both different from the PC/Mac system as well as
different from each other—has been a challenging process. It has become
clear that our planned June release of the console versions isn’t going
to be possible.

Though we have made great progress, we have concluded
that we’ll need about six months to ensure we deliver the experience our
fans expect and deserve.We know that the news of an ESO console
delay is as disappointing to many of you as it is to us.

Less than a month before the expected release and ESO fans have been hit with a potential 6 month delay and maybe even a 2015 release. To soften the blow Zenimax Online Studios have announced that a new arrangement has been made with both Sony and Microsoft that will allow anyone that purchases The Elder Scrolls Online before the end of June will have the opportunity to transfer their characters to either console platform complete with an additional 30 days of subscription.