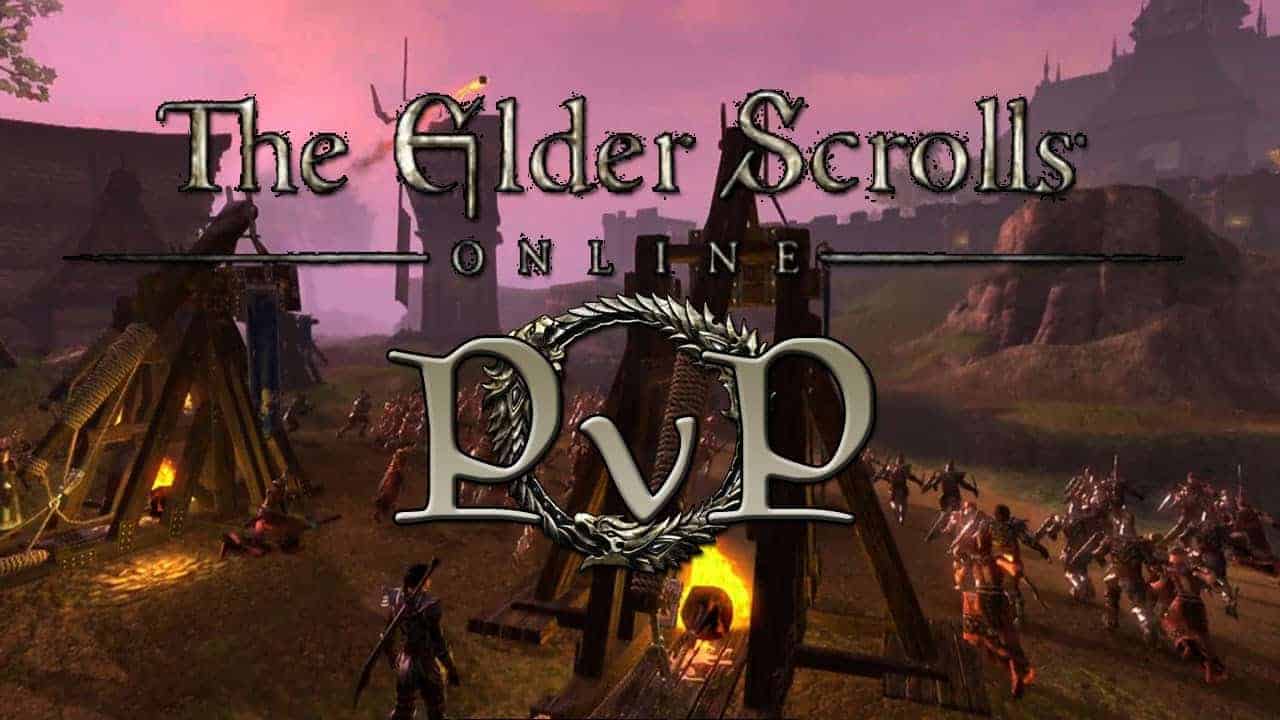 Transcript:
Hey guys Kirk here, and welcome to MMO ATK’s first impressions
of The Elder Scrolls Online PvP.  PvP is,
hopefully, just how you expect it, a wild crazy slaughterfest with blood, murder
and trebuchets all over the place.

There is a lot to take in on your first trip into
Cyradil.  You’ll be going through the
menus, figuring out what your faction owns, where the nearest keep battle is,
where you should fast travel to get there and help out, where your guild is, if
you don’t have a guild, where you can find players to team up with etc.  Once you figure that out, it’s a breeze!  No, not really.  OK, so what is this alliance war?  The whole point of PvP is to capture enemy
keeps, which earns you more alliance points, which allows you to capture more
keeps to control imperial city.  You earn
Alliance points by doing pretty much anything in the PvP zone, from doing
quests to controlling keeps, to capturing elder scrolls to using and buying siege
weapons and more.  Trebuchets, ballastic
catapults, hurling meat and flaming oil, and battering rams to break down the
walls of the fortresses, that’s what you want.
That’s your bread and butter.

OK, so how does capturing keeps work?  You and your team will scope out a keep that
you want to capture.  You’ll first look
for smaller resource points on the outskirts of each keep, the lumber-mill,
which makes the doors of the keep stronger, the farms, make the keeps guards
stronger, and the mine’s which makes the walls stronger.  So your best bet is to capture the small
resource points around a keep before you make your attempt at zerging inside,
because capturing those resources gives your alliance a much better chance at
breaking in.  The resource points do have
their own set of guards, which are AI controlled, they themselves are not so
difficult to defeat, so if you are the owner of a keep, don’t think those dudes
are going to be hold your resources for very long, if the enemy is coming, you
better go defend those points, or watch them fall easily.

So now comes the good shit.
The tackling of the keep.  When
you’re alliance  is ready to attack,
you’ll want to set up your trebuchetes and catapults and place them outside the
keep walls, conversely if you are in the keep, you’re going to be placing these
right on top of the walls and trying to knock out the enemies from below.  The first goal from the attacking party is to
take out the outer walls and knock down the main door.  Most, if not all of the damage, is done using
the siege weapons, your hand weapons do next to nothing, however, once you get
inside the first and second walls, you’ll definitely be doing hand to hand
combat with other players, as well as NPCs that are build around the keeps to
help you fight.

The siege battles can be complete chaos.  If you’re attacking, you’re trying to break
down walls and gates, if you’re defending you may try to sneak outside and
destroy the siege weapons, but at the same time, the enemy team will be trying
to take you down, before you get to the siege weapons.  It’s important, no matter which side you are
on, to be spending your alliances points, more-so for the attacking team,
because if you run out of siege equipment, you’ve got a long way to go to get
more, but if you’re inside, there are NPCs where you can buy them fairly
easily.

Being on a siege weapon is fairly easy, aim where you want
to shoot, look for the arrow that points out where you’ll be bombing and let it
fly.  Catapults are great for taking down
walls and doors, trebuches are good for knocking out other siege weaponry, as
well as taking down walls and doors, while the battering ram is essential for
placing right at the walls to get them down quicker.  I’m not sure the exact time to takes to take
down a door, but from I witnessed it takes around 5 minutes for a battering
ram, with some help, to get a door down.

Dying.  Dying is a
huge part of a siege warfare.  The map is
huge, so dying can be a huge disadvantage for you.  If you’re attacking the keep, you may be
spawned at the nearest location that you control, but you’ll still have to run
a shit ton to get there, and also when your keep is being attacked, your
faction cannot spawn at that particular keep, so you’ll have to run a shit-ton
from your nearest owned keep to start defending as well.  Of course, your teammates can help revive
you, another great reason to be part of a party or a guild, or some sort of
group that you can rely on, as they will know where you died, or you can yell
at them in chat to find your lifeless soul.
Soul gems are the key to getting rezzed, so your team will need to have
a bunch of soul gems on them, otherwise plan on long runs, or lost keeps.

Side note here, PvP is for groups, I mean, you don’t need to
be in a huge zerg group with hundreds to take a keep, but you’ll want to be
part of something of significant size, with some sort of leadership.  During my time in Cyradil I was lucky enough
to join up with a group that was using a VOIP, so that we could arrange our
fights, and keep track of everything going on.
A well orchestrated group is much more effecting then a bunch of random
dudes running around throwing meat at walls.

If you’re on the attacking team, and you make it through the
second set of walls, you are probably ready to take on the inner keep, which is
the last stronghold for the opposing alliance.
Be ready for when the final door comes down, for the last ditch effort
of everyone in a bloody hell mess.  If you
make it through all that, you can now peacefully, hopefully, capture the final
point in the keep and claim it for your alliances own.  And boom, you’re done.  Time to move on to the next one.

It’s important to point out that while you are doing all the
PvP stuff, capturing keeps, taking resources, there are still quests, and
special items and crafting that can be done on Cyradiil.  So there’s plenty of PvE stuff still going on
in the game, you can spend your time doing those side-quests, if you will, or
join up with a party and take keeps, which is probably why you’ll jump into
Cyradil in the first place.

All in all, PVP in Elder Scrolls Online is a shit ton of
fun.  There’s a non-stop battle going on
and there’s always something for you to partake in.  I’m running out of breathe, but don’t take my
word for it, jump into Cyradil today and start taking down some keeps of your
own.  If this part of ESO doesn’t get
your heart pumping, then there’s something wrong with you!