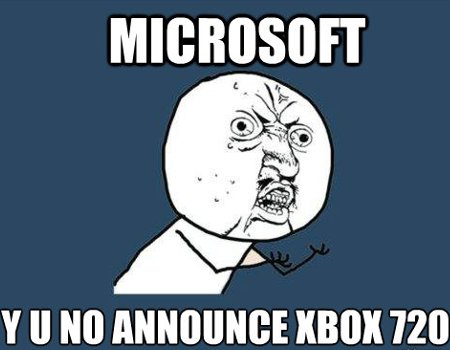 So Microsoft has decided to break our hearts and has just announced that the successor to the Xbox 360 will not be included in the festivities of the 2012 version of Electronic Entertainment Expo, E3 for those in the know.  Instead they have chosen to talk about how great the Xbox 360 is, and how it’s the best year ever and some stuff about Halo 4 and Fable: The Journey and Forza: something or other.

Speculation had been rising that Microsoft would be the next major platform player to show the successor to their current hardware. Rumors reportedly have the console code-named Durango , claim that it won’t be a disc-based machine and speculate that it won’t play pre-owned games and that it won’t serve pizza and that it won’t hold my Big Gulp. Expectations for a Durango reveal this year were running high but a tweet from Bloomberg News reporter Dina Bass squashed those hopes like a bug, like a big juicy bug on your windshield.

“While we appreciate all the interest in our long-range plans for the future, we can confirm that there will be no talk of new Xbox hardware at E3 or anytime soon. For us, 2012 is all about Xbox 360-and it’s the best year ever for Xbox 360. The console is coming off its biggest year ever-a year in which Xbox outsold all other consoles worldwide. Xbox 360 didn’t just outsell other consoles, it also outsold all other TV-connected devices like DVD players, as well as digital media receivers and home theatre systems. And in our seventh year, we sold more consoles than in any other year-defying convention.

This year, we will build on that Xbox 360 momentum. With “Halo 4,” “Forza Horizon,” “Fable: The Journey,” and other great Kinect games on the way, our 2012 Xbox lineup is our strongest ever. This year, we will deliver more TV, music, and movie experiences for Xbox 360-as we’ll make it even easier to find and control your all entertainment. And this year, Xbox games, music, and video are coming to Windows 8 so people can enjoy their Xbox entertainment wherever they go.”