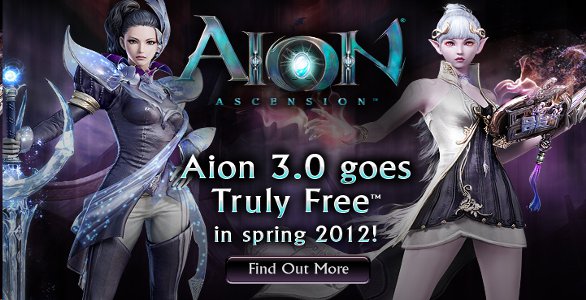 NCSoft has announced that their fantasy MMORPG Aion, will be going free to play along with the launch of their new expansion Ascension, in April.  With new quests, instances and game mechanics to take you from level 55 to 60, you will encounter a wide array of new PvP and PvE armor sets and weapons with a wider level of customization than before.  The newest game mechanics include ground and flying mounts, player housing and additions to the crafting system, PvPvE sieges and skills.  Players will be able to pre-order in-game items on April 4th in the new Aion store called The BlackCloud Marketplace.

Soar to new heights of combat mastery with an increased level cap of 60. Explore new challenging instances and
awe-inspiring zones. Own and decorate your own home using the new highly anticipated housing system. All this and the introduction of mounts makes the Aion 3.0 update the ultimate gaming experience!