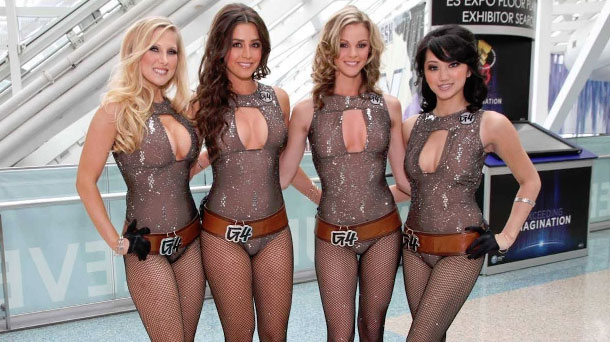 If you’re a gamer, you literally live for E3.  You’ve been prepping you’re website, filling out your schedule and ‘penciling in’ all the parties, lines, games and food trucks that you’re getting excited for.  E3 represents everything that is awesome about the industry, and after it’s all over, you’ll be prepping next year’s adventure to see the latest Call of Duty trailer.

Here’s your guide for what to expect at this year’s E3.

[heading]Monday[/heading]Monday is what you call the ‘pre-party’, only the coolest of the cool guys head out to LA on Monday.  You want to be able to say, “Yeah, I was there when they announced the new Call of Duty game.  Were you there?  No, you weren’t, you watched it online, you don’t know anything.”  In your face, right?  If you go on Monday you have the right to call yourself a true gamer, I don’t care what everyone else thinks, you’re the man!

Microsoft:
Major Nelson confirmed on his private blog that no one has access to that the press conference is called Xbox: Game On.  Microsoft has promised “everything” is fair game, from in-depth looks at previous games, to trailers for unannounced games.  They’re gonna tell us lies about DIrectX12 and how it makes every game run twice as good and that your Xbone just doubled in value.  There’s also going to be some shit about Halo 5 and you’re going to eat it up, you love it!

EA:
Next up is EA, and you hate EA.  They’re voted the worst company in America the last 13 years running, so you hate them.  You hate that they will announce the next Need for Speed game, and the next Battlefield game and that they are releasing games with less content and more premium stuff so you can pay out of your pocket.  But you’ll cheer, you’ll cheer when they say that Mass Effect 4 is going to learn from the mistakes they made on the 3rd and that it’s going to be better this time!

Ubisoft:
You’re kind of spent already from all the cheering when the sign flashes ‘cheer’, but you’ll stick it out, Ubisoft has some cool shit right?  Like .. what’s up with Rayman, and uhh .. Asassins’ Creed, oh yeah, we love Assassin’s Creed.  I played the shit out of all of them, we need to have an AC where they are in like Ancient Egypt and shit.  That’ll be cool.  Oh and then they’ll throw some shitty mobile games on ya.  You’ll cheer.

Sony:
Man, Sony has you staying up real late tonight, hopefully there will be time to hit up some ‘pre-show’ parties.  Sony’s gonna tell you that there’s a huge and significant amount of games coming to Playstation 4 this year.  They are going to hype up Destiny, like .. real bad.  Oh and they’re gonna brag about how much they are all about the ‘gamers’ and for the ‘gamers’ and they’ve got a huge selection of indie titles coming.  You’ll be too tired for the after-parties, but you’ll say to yourself “It’s ok, it’s only day 1.  There’s plenty of time left.”

[heading]Tuesday[/heading]Now the show really begins.  You’ll finally get to walk through the hallowed halls that have housed so many clueless booth babes over the years.  But we love booth babes, so it’s ok.  Tens of thousands of “professionals” have gathered to experience the future of interactive entertainment.  Your buddy who started a new gaming blog last month got approved for press, so it’s on!

Nintendo:
Nintendo is too cool to hold a live press conference at E3, but they’ve planned it enough so that everyone knows that they have scheduled a ‘digital event’ online that takes place the few hours before the doors officially open.  They’ll plead and convince us all that the WiiU is not dead and that they have some great old games that are getting rebooted .. again.  They’ll also brag about the shit ton of exclusives they have.  Won’t they?

Doors Open:
OK, shit.  The doors are open.  Umm, where do you go first?  Do you run over to try to play Destiny so that you can brag to Reddit that you were the first to play the game at E3 and hope they shower you with fake internet points?  Or maybe you go for the Twitch.tv booth because you know of some C-list celebrity who was going to help them live-stream the event and you think she’ll be half-naked.  She is!

After Lunch:
It sucks having to pay $12 for two slices of pizza and a 16oz soda pop.  You update your Facebook fan page with a pic with the caption “#foodporn #hungry #lunch #tasty #delicious #foodgasm”  OK, enough updates for the day, there’s no time when you’ve got 1,000 booths to get to.  But waiting in line sucks, it’s like .. I could wait in this line here, but then i’ll miss out on that game I wanted to play over there, but that line is pretty long too, maybe i’ll check out the Indie games, there wont’ be a line there.  Fifteen minutes pass and you get to the Indie games and wait patiently in line but feel good about yourself for not giving EA your valuable line waiting-ness.

[heading]Wednesday[/heading]You didn’t make it to any parties last night because you wanted to go to the one with that cool new DJ, but like your friend didn’t’ get a write band for that one, so then you saw a party across the street and the line was a little long, so you told the four guys that you were with that you should go get some food at this cool taco place because you’ve never had an authentic California burrito, but it’s like .. huge, the burrito is massive, so you walk back to the hotel just to freshen up and take a quick nap, and when you wake up an hour later you’re kind of like over-it and so you say “It’s ok, it’s only day 2.  There’s plenty of time left.”

Doors Open:
Today you bring your notepad and your Canon digital camera because you remember that you’re press and you should have done that the first day, but it’s ok, you told your Facebook fan page that today you’ll upload a ton of stuff.  You want to go to Oculus VR because you want to make fun of all the dudes in line for using a Facebook product.  You take a pic and post it to your Facebook page with the caption “Look at these idiots”.

After Lunch:
You feel like you’ve walked a thousand miles already.  I mean, how many times will you pass the Wargaming booth before you stop and actually try to figure out what Wargaming is and what games they have.  They have some pretty sweet swag, so you feel it’s worth your time to wait.  Turns out, you don’t like their games, oh well, Steel Series has some new headset they’re showing off.  It’s nearly identical to last years model, except this one has a racing strip, so we should go check it out.

[heading]Thursday[/heading]There was no time left.  You had to force yourself to go to a party last night, and it was terrible.  First off, the ratio of
guys to girls was like 20 to 1.  You and your five friends (all guys) had trouble getting in because the guy from Wisconsin didn’t wear ‘going-out shoes’, so he had to give the bouncer $20 just to get in.  The music was way too loud for your liking, and the drinks were ridiculously over-priced.  You danced with your buddies for like, half an hour, and the only girls that even passed by were the ones handing out the ‘free’ shots.  But they were mostly water.  Oh well, you’ll tell your friends on Facebook that you KILLED it at the clubs.

Doors Open:
You’re almost too tired to even walk today.  The cab took forever last night and you’re kind of over it.  You may do two or three rounds around the convention, snapping awkwards pics of booth babes as you’re afraid to ask for them to pose for you.  You know they get asked that all day, but you don’t want to be ‘that guy’, but you still want a pic, so .. what else are you supposed to do?

After Lunch:
Fuck it, you’re done.  You left your bags at the bag-check this morning, so you’ll wait in an hour long line just to retrieve it before the hour long taxi cab line confronts you.  You could walk around the corner, but there could be gang-bangers over there, so might as well wait.  You’ll be safe on the plane back to Oklahoma City soon.