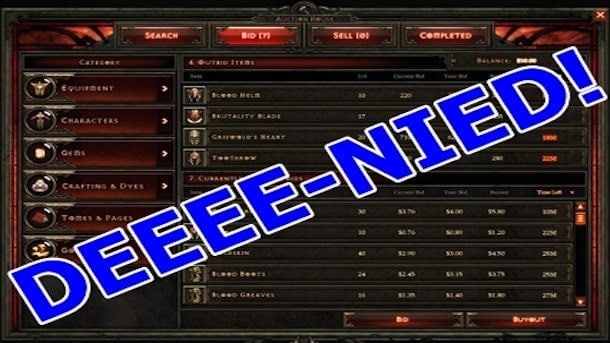 As seen on Todays Daily XP Video!
Blizzard is finally resolving the exploitation of the newest patch for Diablo 3. Blizzard shut down the in-game auction house earlier this week after finding a related bug in the most recent update. This bug essentially allowed players to duplicate trillions of gold, throwing off the economic state of the virtual world.

Instead of penalizing everyone in the game by rolling back servers, Blizzard seems to have found a very fair alternative. With many players legitimately buying and selling items during this whole process, it?s only fair to let that handful of players keep what they rightfully achieved. 415 people were found utilizing the patch?s exploit which is why those accounts, and only those accounts, will be removed from the game. The remainder of the virtual profits will be donated to charity.

There may have been a plethora of virtual money exchanging hands during the patch exploitation, but it?s the real-money Auction House that matters. All real-cash proceeds made by the now banned offenders have been tracked down, and will swiftly go Children?s Miracle Network Hospitals. Blizzard may have had many gaming missteps in the past few years, but they are certainly handling this situation right.