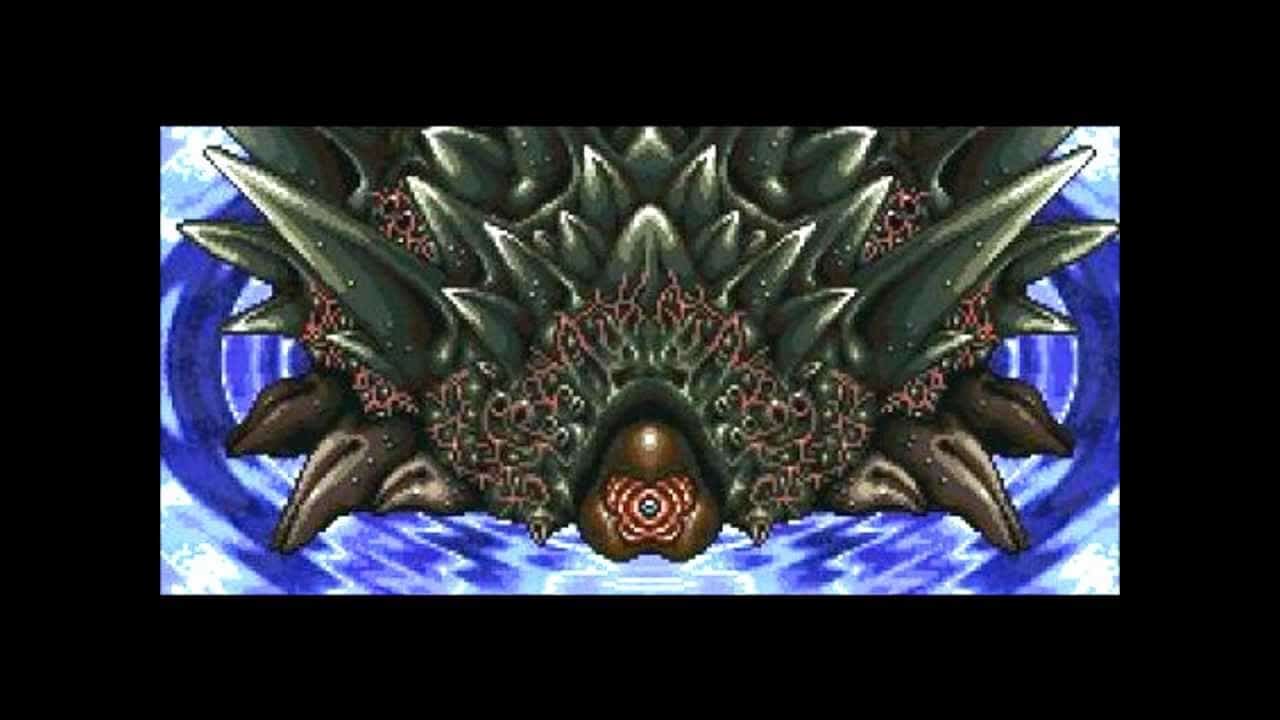 Ever since H.P. Lovecraft strolled along with the Cthulhu mythos; eldritch abominations – cosmic monstrosities that generally exist outside of time and space  – have had their place in popular culture secured. It’s not hard to see why. Human beings often like to think that we’re the center of the universe. As such, there’s something terrifying; some deep, primal fear associated with the concept that beings exist to which we’re nothing more than fodder (if we’re even relevant enough to be considered at all).

A good analogy for what most cosmic horrors regard humanity is to consider how human beings relate to aphids, mayflies, or gnats. It’s pretty much the same thing.

See, an eldritch abomination is something you generally can’t fight against. They’re ancient – so much so that man’s existence is but the flicker of a candle to them. They’re immortal and unknowable. They’re also impossibly powerful: they warp reality just by existing, and as a result, they’re completely unbeatable.

Apparently, all these qualities make them the perfect antagonists for a video game.

Cosmic horrors have been a mainstay of gaming ever since the industry’s nascent stages. After all, what better way to show all the chips are down than to stick the player up against something that laughs at the laws of physics and warps reality just by being? From Chaos to Gigyas, from Jenova to Jack of Blades, these beasties have existed almost as long as gaming itself.

It’s about time they got their due, don’t you think?

“Rudimentary creatures of flesh and blood. You touch my mind, fumbling in ignorance; incapable of understanding. There is a realm of existence so far beyond your own you cannot even imagine it…We impose order on the chaos of organic evolution. You exist because we allow it, and you will end because we demand it.”

Show of hands, folks – was there anybody here who didn’t get goosebumps when Sovereign revealed itself on Virmire? Up until that point, it was assumed that the main antagonist was Saren – the knowledge that he was little more than a puppet; that a creature like Sovereign could actually exist was chilling, to say the least. The understanding that hundreds of them existed? That was terrifying.

To sum it up, the Reapers are essentially an entire race of  capital ship-sized machine gods which surface every 50,000 years or so with one goal – the complete, thorough extermination of all sufficiently advanced organic life. Without spoiling too much, the cycle has been going on for millions upon millions of years. These things are ancient, and worse? Well…let’s just say that the original creators of the Reapers are even more horrifying than the Reapers themselves, and leave it at that.

“You are already dead.”

C’thun fits the quality of “impossibly powerful” where cosmic horrors are concerned quite well. His appearance is a little freaky, to boot.

In what we can assume was C’thun’s first appearance(though he was simply labeled “Forgotten One”), he was defeated by Arthas and Kel’thuzad. It was an incredibly close fight, which almost spelled the death of both warriors.  To give you a bit of context, both of those two went on to become raid bosses – the former actually ended up being the final boss of the Cataclysm expansion.

But we’re getting ahead of ourselves. At some point, Blizzard decided there wasn’t enough Lovecraft in their MMO. So they set out to fix that with The Old Gods – they decided to make one of them a raid boss. That was the true birth of C’thun.

When C’thun was first released, he was literally unbeatable. Blizzard ended up having to release a patch to reduce his strength, and he still required a full, perfectly coordinated and perfectly geared forty man raid to take down.  The worst part, though? It’s heavily implied that he still hadn’t quite recovered from the beatdown the Titans gave him millennia earlier. He was fighting at only a fraction of his power – and it still took a coalition of some of Azeroth’s mightiest champions to take him down.

“This…this can’t be the way the world ends…”

Lavos is a cosmic parasite – that is to say, it seeks out planets rich with life energy, which it then devours over the course of several centuries. Eventually, it surfaces, destroying the planet in a cataclysmic rain of fire, at which point…well, no one’s entirely sure what happens after that. It’s been heavily implied, however; that the creature either reproduces or moves on to the next world.

Oh, and for those of you trying to apply any sort of morality to Lavos? Don’t bother. This thing can’t be reasoned with, it can’t be talked to, and it can’t be intimidated. It just…is. It’s a creature that’s well and truly alien, and that, my friends, is what makes it so frightening. Well…that, and the scream. That god damned scream. You can almost feel reality getting kicked in the nuts.

“….”
The Kirby franchise is known for its cheerful setting, colorful characters, and happy-go-lucky themes. It’s also known for having final bosses that look like they were ripped out of Edgar Allen Poe’s darkest nightmares. It’s fitting, if you think about it – the Kirby universe is referred to as Dream Land. What’s the natural opposite of a dream?

It wasn’t hard to decide which of the bosses to put on this list. 0 – and Dark Matter; heavily implied to be an extension of the creature’s will – is, hands down, the most terrifying enemy in the entire franchise.  It doesn’t seem to have any motivation besides the proliferation of Dark Matter throughout the entire universe – not that it’s in the habit of explaining itself. It communicates even less than Kirby. That’s a considerable accomplishment, given that Kirby utters nary a word over the course of the franchise.

“It is now your destiny to fight the Eternal Darkness. I give you a gift in return for an obligation. The gift is your life, sweet dancer. The obligation is this. You hold one of Mantorok?s hearts ? the essence of the Corpse God! To some it is a source of great power. From these people, you must defend it, lest they use it to destroy what little brightness your world has left in it… Guard it well!”

In addition to looking like he could be C’thun’s grandfather, Mantorok the Corpse God holds the unique distinction of being one of the few on this list that isn’t either indifferent or outright hostile to humanity. As a matter of fact, it’s implied multiple times throughout Eternal Darkness that this creature – a being so powerful that it corrodes reality around it simply by existing – is actually on humanity’s side. It likes humans, for some reason fathomable only to itself. It’s also the only reason anyone in the game is able to challenge the other ancients and destroy them (hence saving humanity from a fate worse than death).

Definitely a bit of a departure from the norm, no?

“All knowledge has a price…”

Hermaeus Mora and his Daedric realm of Apocrypha are essentially Bethesda’s love letter to H.P. Lovecraft. As the Daedric Prince of Knowledge, Hermaeus Mora has access to a healthy dose of That Which Man Must Not Know – as a matter of fact, he boasts the largest collection of forbidden knowledge in existence, and is always looking to expand his library. Though he’s certainly knowable – and somewhat predictable – his rather disturbing and alien appearance, vast stores of knowledge and bizarre daedric plane firmly secure him as an abomination. Even so, there’s some knowledge yet that even he does not possess – but not for long.

“All has become chaos…we have descended into hell.”

The Grotesqueries are called by many different titles: The Watchers. The Nameless. The Gods. They’ve the power to manipulate reality – even sealed away as they are – and they can possess and control the weak-minded. Their only desire – if we can even ascribe a human emotion to alien creatures such as these – seems to be to return to the mortal coil. In several of the endings, they succeed. I’ll give you three guesses as to what happens, and the first two don’t count.

It’s bad enough that the music which heralds their coming is warped as all hell – whoever designed them made full use of the uncanny valley effect. They’re a race of colossal, vaguely humanoid infants with a full set of teeth and swollen, closed eyes. They constantly make strange, distorted cooing sounds. It’s the the sort of thing you’d hear from a baby, if that baby was spawned on the ninth layer of hell to punish mankind for the sin of existing.

My words don’t do these things justice. Watch this video, and try not to shit out your spine in sheer terror.

“You cannot grasp the true form of Giygas’ attack”

Of course, you can’t be surprised to find Giygas on here. He’s pretty much one of the most iconic bosses in Nintendo history.

For a game where one of the enemies has a stunning attack which involves him uttering a curse word, Earthbound’s final boss is especially goddamn twisted – reportedly an attempt by the lead developer to work out the trauma of watching a violent murder/rape depicted on-screen at a movie theater when he was just a child. Yeah, we’re already off to a good start.

Basically, Giygas is a psionic of incredible, nigh-unstoppable power, who is destined to conquer the Earth a mere ten years after the events of Earthbound. Fighting him here, when he is at his full strength, is a futile endeavor – one all but guaranteed to end in defeat. The solution? Go back in time to perform what is essentially a divine abortion. It’s about as disturbing as it sounds: even though you’re fighting a cosmic horror, you can’t help but feel as though you’re a terrible person whose spot in hell is more or less guaranteed.

Oh, and this was supposedly a kid’s game.

Honorable Mentions:  The Elder God(Legacy of Kain), Sin(FF10), Soul Edge, The Red Queen(American McGee’s Alice), The Creator(Aquaria), The Overmind(Starcraft), The Gravemind, Zeromus, The Necromorphs(Dead Space), Jenova, The Gman, The Old One(Demon’s Souls), Everything from Silent Hill