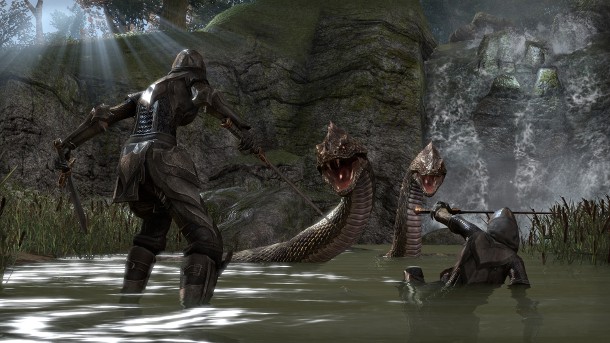 As you’re no doubt aware, The Elder Scrolls Online is currently in beta – with a launch just a few months away. When Zenimax first announced the title, I’m not gonna lie – I was excited.  Although the hype’s died down a bit by this point, the game’s still got the potential to be something incredible, so long as we’re willing to give it a chance.

Last week, I bashed The Elder Scrolls Online, going over the reasons it was doomed to failure. This week, I’m going to look at things from the opposite perspective: here’s a few reasons ESO might turn out to be a damned fine game, and why you shouldn’t give up on it just yet.

The Elder Scrolls pedigree is a strong one, and the franchise is one whose reputation Bethesda wants to preserve. For that reason alone, it’s reasonable to expect The Elder Scrolls Online to be a quality release. After all, the studio’s sort of resting its reputation on it, right?

If there’s one thing Bethesda games are notorious for, it’s the horrifying gallery of bugs and glitches they all-too-often tend to launch with. Skyrim itself was rife with them, from the hilarious to the bizarre to the downright game-breaking. Given that Bethesda is only acting as a publisher for ESO, we can reasonably expect that it’ll be at least a little less broken than your typical franchise title. Plus, it’s an MMO – those are a lot easier to test.

[heading]You’ll Get To Explore All Tamriel – Which Looks Beautiful[/heading]
Although I’m not really sold on how the races of Elder Scrolls Online look at the moment, I will admit that the world itself is goddamn beautiful to behold – and that it most definitely looks like an Elder Scrolls game should. Not only that, players have been clamoring for the opportunity to explore all Tamriel ever since the launch of Morrowind. This could be our chance; one of the only ones we’ll ever get.

[heading]It’ll Launch On Both Console And PC[/heading]
This might not seem like much of a strength at first, until you consider the huge crop of Elder Scrolls fans who don’t actually have a PC capable of playing The Elder Scrolls Online. By launching on the PlayStation 4 as well as the PC, it’ll have the ability to connect with a wider audience than it ever possibly could have were it to ignore the console. Not really something to be excited about, but a decent point from a business perspective, no?

[heading]The Subscription Model Might Not Be Forever[/heading]
Here’s the thing: a lot of MMORPGs still launch with a subscription model, even though experience tells them there’s no way such a model could possibly work in light of competitors like World of Warcraft. There’s a reason for this: by launching with subscription fees. an MMO has the chance to build up both a user-base and financial base. That way, when it inevitably has to go free to play, it’ll have the financial backing to pull it off. Turns out, this has become standard practice.

I won’t lie: although ESO does look painfully generic in a lot of ways, the way PVP is set up is actually quite intriguing. By my understanding, the only real PVP zone in the game is the central province of Cyrodiil. It’s massive enough that this tiny detail doesn’t really matter, of course; the PVP area is positively staggering in its size, and there’s a great deal to do once you’re there. Not only will you engage in infantry skirmishes with opposing factions, you’ll use siege weaponry to both attack and defend keeps. If Zenimax polishes its combat a little, this could well be the game’s strongest point – and its biggest draw.

Oh, and have I mentioned that whichever faction takes the Imperial City gets to put someone on the throne as Emperor?

[heading]Character Progression And Questing Is Unique As MMOs Are Concerned[/heading]
One thing we’ve all gotten used to with MMORPGs is that everyone is confined to a particular archetype. Warriors, for example, aren’t going to charge howling into battle wielding powerful magic, and spellcasters aren’t going to wield the primal building blocks of the world clad in full plate. ESO tosses all that out the window, using a leveling system similar to Oblivion or Morrowind. Though there are still classes and class skills, you can build your character as you see fit, leveling them up by favoring one particular set of skills over another.

The questing system looks pretty nifty, too: every quest has a story to tell, and the whole game puts a focus on exploration rather than, for example “grind for ten clannfear beaks.”

[heading]The Story’s Not Terrible[/heading]
Although the game plays fast and loose with established lore (and admits to doing so), the story’s not really so bad, as far as the Elder Scrolls franchise is concerned. Coldharbor is genuinely menacing and terrifying place, and the idea that Molag Bal might subjugate all of Tamriel by pulling it in is a pretty distressing one. Factor in the ambitions of the three powers vying for the throne, and you’ve a surefire recipe for something fascinating and fantastical.

At any rate, the narrative will be better than that of Skyrim’s Thieves Guild.