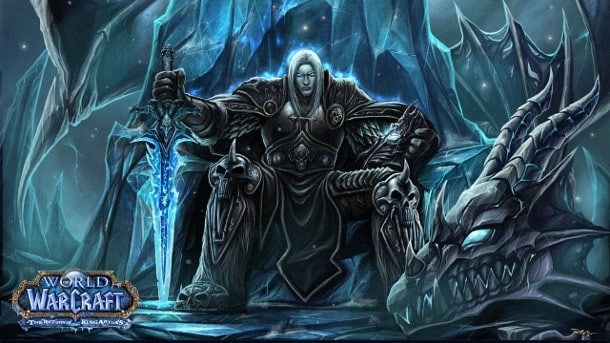 As seen on Todays Daily XP Video!
There’s no getting around it: Blizzard’s immensely popular World of Warcraft is the undisputed king of MMORPGs. For almost a decade, Blizzard’s title has sat upon a gilded throne, gazing scornfully down at those who would try to steal its crown. And make no mistake – there have been challengers. There have been so many, it’s sometimes hard to keep count.

They all have one thing in common – they inevitably fail. It seems every year, we’re seeing the birth of a new title heralded as a “Wow killer.” It’s gotten to the point where this phrase is little more than a buzzword; meaningless label  applied to any game that looks promising. Even though Blizzard is starting to feel a bit of pressure from the free to play market, World of Warcraft has nevertheless hung onto its crown, leaving a trail of battered, bruised pretenders in its wake.

Just what is it that makes the game so popular? Why has it retained its fame and player-base for so long? And why, even as it hemorrhages subscribers, is it still one of the most played games in the world?

Traditionally, most MMOs aren’t exactly easy to get into. For many, that was part of the genre’s charm. You felt well and truly accomplished when you figured out what it was you were doing; you felt a real sense of achievement when you overcame a game’s myriad challenges, most of which were peppered all the way from early-game to endgame. World of Warcraft originally lifted something of that difficulty curve, way back in its early days…and has since completely re-worked it to its liking. This isn’t necessarily a bad thing.

While lowering the difficulty curve has certainly alienated a whole camp of WoW’s more hardcore players, it’s also brought in millions of people who might otherwise avoid it. In short, World of Warcraft may well be the most accessible MMORPG on the face of the planet. Further, many of those players quickly become dedicated subscribers, all of whom have the potential to become skilled players.

I’ll be the first to admit that World of Warcraft isn’t a game for everyone. I deactivated my account some time ago, out of boredom (though lately, I’ve been rather interested in starting it up again). While it lasts, though? It’s fun. Really, really fun. Every class has its own distinct flavor and flair, and there’s something for pretty much every playstyle you could possibly think of.

And now at least half the MMORPGs releasing these days try to ape it. That’s telling in and of itself.

Never underestimate the power of a good ad campaign. Blizzard certainly hasn’t, and look where it’s gotten them. Of course, a lot of its success owes just as much to the studio’s pedigree as it does its marketing tactics.

See, if any developer can be referred to as a legend, it’s Blizzard. Even before World of Warcraft went live, it was responsible for some of the best, most popular games ever made. Blizzard’s portfolio was extremely strong at launch, and many ended up playing WoW solely because the developer hadn’t done them wrong yet.

Beyond that, Blizz has done a masterful job getting the word out about the game. Their marketing campaigns for Wow have all met with smashing success, and contributed a great deal to the title’s rapid proliferation.  This extends to the in-game experience, as well: Blizzard understands its fans, and does a very good job in getting them stoked for new updates.

Simply put, World of Warcraft is the Facebook of MMORPGs, in that many are still playing it because all their friends have (and besides that, they’ve already put a lot of work into it). Indeed, one of its chief strengths is that it’s been around for so long that it’s become a fixture for more than a few gamers. Many of these people keep playing it because they’re already playing it, and taking up a different MMO would simply be too much effort.

Of course, there’s a reason World of Warcraft has been around for as long as it has. Blizzard is very good at releasing regular content updates, and pacing add-ons to the game. Aside from major expansions such as Cataclysm and Mists of Pandaria, World of Warcraft has enjoyed virtually hundreds of smaller additions to its experience, including new instances, weapons, and quest-lines.

This regular update schedule has allowed Blizzard to keep World of Warcraft fresh well after most games would have closed down their servers. It also helps that Blizzard has a great deal of dedication to quality. Like any game of its size, WoW has bugs and glitches…but those often pale in comparison to the problems with many other MMOs, both at launch and beyond.

One big reason I’ve heard a lot of people give for their dedication to the World of Warcraft actually has nothing to do with the game itself: devotion to the friends and comrades they’ve met while playing. One of my friends actually met her husband over WoW, and many others have formed lasting friendships and romances through Blizzard’s servers.

In this, World of Warcraft is simply the medium. Although Blizzard has done an excellent job in making the game a social experience, it’s the players, not the gameplay, that keep many coming back.

While we’re on the topic of people, the staff that keep WoW running are all pretty awesome. My own personal experience with Blizzard’s GMs was almost overwhelmingly positive. They were as a whole both personable and genuinely helpful; many of them were even amusing to talk to (I remember one who actually role-played his entrance and exit when assisting me). While there were a few occasions where the response time was a bit longer than I would have liked, as a whole, the employees Blizzard has on-hand to assist its players are, as a whole, genuinely good people.

Trust me – that helps. I’ve dealt with unpleasant server admins and GMs before (who hasn’t?), and it thoroughly ruined my enjoyment of the game I was playing.

Last. but certainly not least – and this owes a great deal to how long the game’s been around – World of Warcraft has essentially become a fixture of modern culture. I challenge you to find at least one person who hasn’t heard of World of Warcraft. Then find at least four who haven’t played it at one point or another. You’re likely to be hard-pressed to do so.

WoW h
as held the throne of MMORPGs for many a year, owing as much to Blizzard’s efforts as it does to the game’s high quality. It may not hold the throne for much longer, though. As we move forward into new business and subscription models, its past glory seems somehow brighter than its current sheen. Many herald that, in the face of rapidly declining subscription rates, we may finally be seeing the death of WoW(particularly with Blizzard hard at work on its next MMO). At the very least, it may soon abdicate its throne and crown to another, worthier game.

That day is still a long way off, I think. Blizzard is no stranger when it comes to adapting to new trends. They’re already considering micro-transactions; the first twenty levels of WoW are free to play. Plus, we’ve yet to see a game capable of bringing WoW to its knees, we’ve yet to encounter a title even remotely worthy of being called a WoW killer.

Until we do, the king still reigns supreme.