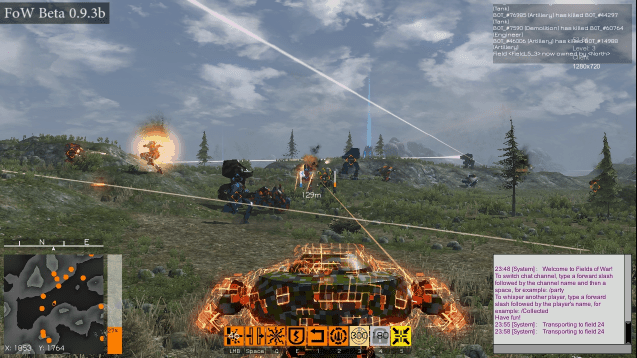 As seen on Todays Daily XP Video!
MMO ATK is pleased to announce the release of a brand new, mech shooter MMO called Fields of War. The games website technically has the game listed as a beta but developers at Thermal Erosion are confident that their game is ready for purchase.

Fields of War is a massive multiplayer third-person shooter, which focuses on large scale battles based on territory control. The fast-paced combat will be reminiscent of many mech related MMO games, but finds an original way of incorporating the type of teamwork that generally leads a group to victory. The most noticeable feature of this online game is the sheer massiveness of battles. Up to 200 players can partake in a territory skirmish at once, with competent reactionary AI to keep each game balanced.

Fields of War has five playable classes and a long list of abilities to prevent the game from getting stale for most players. The MMO is built for PC gaming, as it has cross-platform functionality between Windows, Mac, and Linux. The game is available from the company web store at http://www.thermalerosion.com/store, and will start at $14.99. There?s no telling how the game will change or hold up in the long run, but Thermal Erosion has definitely delivered a one of a kind MMO experience, so it?s worth checking out.