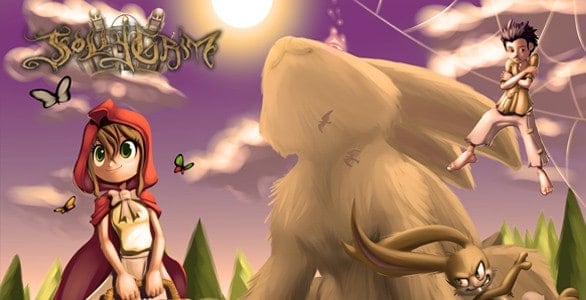 GameSamba announced today that the closed beta test for JollyGrim, a card-based strategy and role-playing game, will launch next week on Friday, September 21. Set in a world where fairy tales come alive, players enroll as students at the?JollyGrimAcademy?and wage battles with other players and NPCs using the cards they collect. Unlike other card games, the battles in JollyGrim take place in real time, not in turns.

JollyGrim combines card collecting with tactical role-playing and real-time strategy gameplay. Each card is treated as a “unit” on the field and features Attack and Defend stats on all four sides, making position and strategy an important aspect of the game. In addition, each card had Health points as well as a cooldown time, so players must learn to defend and block. The cards feature a variety of characters from fairy tales, myths and legends, plus some original ones as well.

JollyGrim is the first free-to-play game that combines a rich single player experience with a full online multiplayer mode. Although the game features story-based episodic campaigns for players to hone their skills and build their decks, the real action is in the multiplayer combat, with a variety of play modes including 1v1, 2v2 and 3v3. As players level up, they can unlock additional gameplay features, strategies and bonuses.