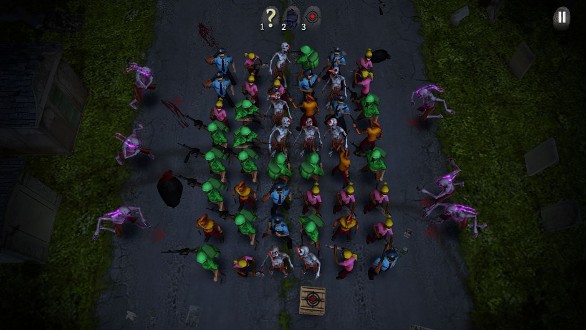 Heya folks! Guess what I have for you today on Indie Game of the Week? More zombies! Specifically, I’d like to introduce you all to a fun little game known as Containment. Developed by Bootstrap Games, it bills itself as a “Zombie Puzzle Action Game.”  That may sound a touch odd to all of you, but after spending a bit of time with the title…that’s honestly the most accurate way to describe it.

The premise of the game is pretty simple. The zombie apocalypse hit. Civilization as we know it has come crashing down. Mankind now consists of bands of desperate survivors, fighting for their life to keep the living dead under control and avoid joining their ranks. It’s pretty standard fare for a zombie game, truth be told. Though there are a few text-based ‘cut-scenes’ as you work your way through each level, you probably won’t be paying much attention to them. At its core, that’s not really what the game’s about.

Basically, you’re presented with a grid. Scattered about this grid are four different ‘types’ of survivors: Police, Street Punks, Doctors, and Soldiers. There’s also a whole plethora of zombies all over the place, as well. In order to eliminate the living dead, you’ll have to surround each group of zombies with survivors of the same ‘type.’ Once you do this, the zombies will die.

To add a bit of unique flavor to the game, each survivor has their own unique kill animation, and each one also has a chance of giving you a unique item on killing a zombie. The Police grant you access to snipers (which can instakill a single zombie), the Street Punks give you molotovs(lights the undead on fire), the Doctors give you Hazmat suits(provides resistance to infection), and the Soldiers give you Grenades(one word: boom). Additional items include air strikes, electrical blasts and random junk drops.

Oh, there are also super zombies. They’ll need to be surrounded twice if you want to take them down. Alternatively, you can just use an item to do away with them.

In order to introduce a bit of tension to the title, if a zombie is left for too long unattended, it’ll start gnawing on one of the nearest survivors. At that point, you’re basically hit with a countdown. Fail to contain the zombie, and you’re down one survivor. Each and every zombie will continue to spread the infection in this way until culled. In other words, if you’re not careful, it’s extremely easy to lose the entire board to a mass of teeming, hungry undead.

All in all, Containment is a fun way to kill a few hours if you’re particularly bored, and definitely worth the paltry $5.00 price tag. It’s also available for iPad as well, if you’re into that sort of thing.