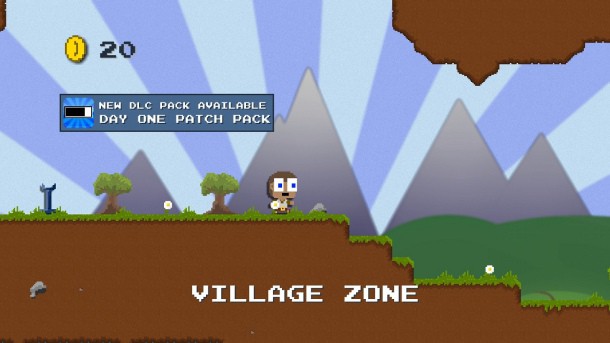 Micro-transactions are running rampant across the games industry. Freemium games roam the wild in search of helpless wallets to devour. Titles ship with day-one DLC. Amongst all this chaos, one developer has risen up to voice their dissent. They did it by creating a game.

Developed by Going Loud Studios, DLC Quest is a fun and simple platformer which essentially serves as a running commentary on many of the more questionable elements of game development. You’re put into the role of hero by the name of Player. In the original game, you’re tasked with stopping the Bad Guy, who’s kidnapped the princess. In the sequel, Live Freemium or Die (now bundled with the game on Steam), things get a bit more complicated, as you’re tasked with defending a village from a horde of monsters.

In both cases, the main thing holding you back isn’t the antagonist: it’s gameplay features. “Player” is forced to wander about collecting coins in order to unlock such abilities as multi-directional movement, weaponry, and the ability to move through a forest. As you can probably tell, the narrative is simplistic to the point of absurdity.
That’s kind of the point, though. The game thrives on being a living parody of pretty much every title released in the past several years. It’s packed near to bursting with tongue-in-cheek references, common gaming tropes, and takes every available opportunity to mock everything from fetch quests to ‘exclusive’ content to the development process itself.

The coin-collecting mechanic which is central to DLC quest is also one of its main weaknesses. Particularly in Live Freemium or Die, the amount of backtracking the player had to do seemed a bit excessive, while the process of seeking out every coin in order to ‘unlock’ every feature at times felt rather tedious. Of course, this, too is probably a riff on our obsession with achievements (known as “awardments'”).
Thankfully, DLC Quest doesn’t really last long enough to become truly grueling or frustrating. Even accounting for the expansion, you’re not going to be spending more than a few hours on it, at most. If you’re doing a speedrun, you’ll probably spend even less time. With some titles this might be a problem; with DLC Quest, it mostly ensures that things don’t get too stale.

Plus, since it’s only $3.00, the length doesn’t feel like much of an issue. At the very least, it’s a fun way to whittle away some time.