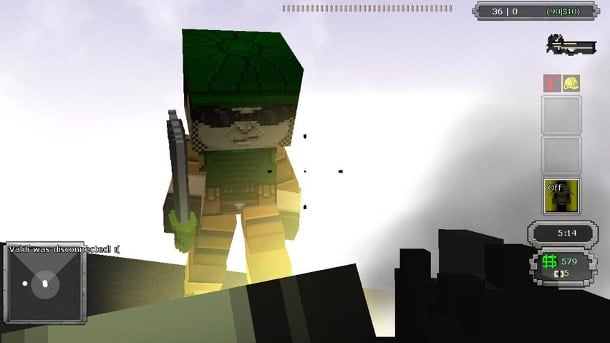 When I was younger, I’d something of an unhealthy obsession with Lego. I had boxes upon boxes of the little colored blocks, and I’ve lost count of the number of times I inadvertently stepped on one (or several). I’d spend literally hours creating worlds and telling stories with them.

As I grew older and moved out of my parents’ place, I didn’t bring my Lego with me. I left it sitting in the basement, collecting dust. Eventually, I began to forget the great joy it used to bring me. Then I discovered Minecraft.

In an instant, all those countless hours spent happily clicking pieces of plastic together rushed back to me. I’d rather not recount how many hours I spent crafting entire worlds (particularly with the release of Creative Mode). Likely at least as much time as I spent with Lego throughout my childhood. Perhaps more.

It was my obsession with Minecraft – and my love of sandbox games – that first drew me to Guncraft. Fully destructible environments? The ability to build in the heat of battle? Level, weapon, and avatar creation utilities?

The game proper itself is fairly easy to get into. Simply purchase, create an account, log on, and select a server. You’ll have a small array of default classes at the beginning; you can create more in the class creator, and select from a collection of new skins, perks, weapons, and killstreak bonuses. Each class receives a construction perk and a combat perk, as well as several options for streak benefits. If you’ve ever played Call of Duty or Battlefield, this interface should feel familiar to you. As an added bonus, there’s no leveling system; everything’s available to you right off the start.

Guncraft at the moment features several game-types, several of which are inspired by Minecraft. Spleef, for example, tasks you with drilling the ground out from under your foes, sending them to their death in a lake of lava; Meteor Survival, meanwhile, requires some fancy footwork to avoid a hail of explosive, fiery stones, and lava survival tasks you with dodging an ever-heightening lake of fire. Perhaps most interesting (and difficult) of Guncraft’s unique game modes is Siege, which pits two teams against one another as each races to construct a trebuchet before the other.  It’s also got your standard laundry list of FPS gametypes, such as deathmatch and Capture the Flag.

In all cases, players can swap between combat mode and build mode. Everything flows fairly well, and battles always tend to be exciting and fast paced. One thing I will say – and one possible, minor flaw – is that headshots seem to be a bit easier to pull off than in other games, owing to the cartoonishly large heads of the Voxel models used in-game.

Nevertheless, the game’s fun to play, and the addition of destructible terrain as an oft-vital gameplay element completely changes the flow and feel of matches. Often, a map will slowly break down and degrade as players use weaponry and explosives to chip away at the terrain; other times, the entire layout of a map might change as it’s broken down and reconstructed through the course of battle.

There’s also a voxel-based map editor, which allows you to craft your own levels and submit them to Exato for approval. Those that pass find their way onto the official servers. If you’d prefer, you can also create your levels in another program, such as Minecraft, and use the Voxel Importer to upload them to Guncraft.

Things get a bit more complicated with the Prefab editor. Basically, when you’re in build mode, you can either free-build, or plop down a prefabricated structure. Knowing which structures to use – and when – is a big part of some game-types, and the ability to customize and create your own adds a whole new layer of depth to the game.

Lastly, there’s gunsmithing, which allows you to utilize the voxel map editor to build yourself a weapon. Basically, it’s like you’re doing pixel-art in three dimensions; once you’ve a satisfactory design, you can assign stats, customize the ironsights, and fine-tune details about how the weapon looks and fires. If your weapon passes through the approval process (yes, Exato has to approve it first, so no dickguns), it’ll be available for you (and potentially other players, as well) to wield.

I’ve spent countless hours happily building things in Minecraft. I foresee myself spending countless more in Guncraft. After all, it’s one thing to be able to create your own maps…and another altogether to be able to explode the hell out of them. You can visit Exato’s website (and purchase the game) here.