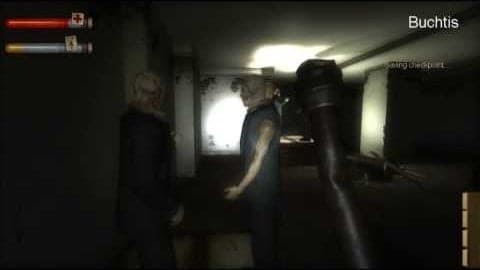 The more I’ve thought about it, the more I’ve come to something of an epiphany: some of the best survival horror games ever made were developed by independent studios. Admittedly, that should have been a foregone conclusion, because Amnesia. With that in mind, I suspect the next few entries in my Indie Game of the Week series shall delve through the annals of horror games floating around online in an effort to sort the gems from the tripe.

Today, I’ll be taking you all on a lovely little romp through an abandoned, haunted manor infested by demonic bronze mannequins; recommended to me by my significant other (who is hysterical in more than one way when she plays horror games). It’s called Kraven Manor, and it was developed by a group of thirteen graduate students from the University of Plano, Texas – presumably in their spare time. Don’t expect the quality to suffer overmuch because of that: it’s actually more polished than a lot of AAA games I’ve played.

In Kraven Manor, you take on the role of an unnamed explorer, who’s somehow found themselves wandering the halls of the titular mansion. Almost immediately, two things become clear: first, that the mansion is clearly haunted, and no one in their right mind should be here. Second, that the original owner, William Kraven, was a very, very depraved fellow.

Horror games are all about atmosphere, and this is one thing that Kraven manor does extremely well. Save for when I was in the entrance hall, I felt a near-continual aura of dread. There was something gnawing at the back of my mind, a nagging feeling that something here simply wasn’t right. In other words, I felt exactly as one should feel when playing a game of this genre: harried. Anxious. Paranoid.

One of the most impressive mechanics in Kraven Manor for me was the way it dealt with the map and the layout of the manor’s rooms. The developers, inspired by Betrayal at the House on the Hill (a fantastic board game which you should all go and play right this instant), set up a scale model of the manor in the entrance hall. In order to progress, you need to seek out room models, at which point they can be placed against one of the entrance hall’s doors. Doing so will allow you to move through the corresponding door in the game, complete with a satisfyingly thunderous rumble.

Unfortunately, since the game only features three or four rooms, the feature doesn’t really see a great deal of use.

Concerning the monster, I found the silent, faceless mannequin that harries you over the course of your exploration to be quite suitably unnerving. At several points, I was more terrified of them than I ever was of the creatures in Amnesia: Dark Descent. Let’s be honest: mannequins are goddamn terrifying, especially ones that only move to screeching, discordant noise when you can’t see them.

Kraven Manor isn’t without its faults. None of the puzzles were terribly challenging, mechanics can get a little glitchy at times, and the game itself is incredibly short: you can probably finish it in about half an hour to an hour, depending on your level of skill. Still, for a side project, it’s extremely impressive, and the developers have promised to stick around and further develop the title, which is technically still in beta.

Go here and download it. You won’t be disappointed.