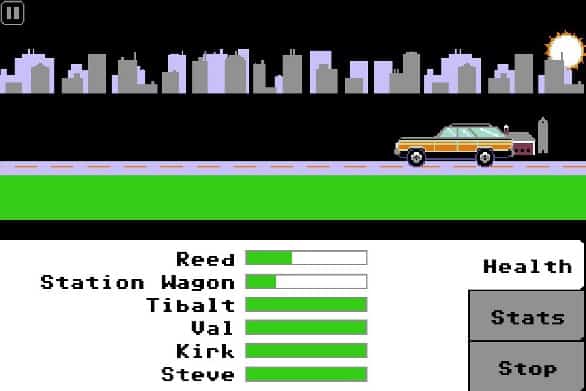 Hey there, ladies and gents! In today’s edition of Indie Game of the Week, we’re going to have a discussion about zombies, road trips, and dysentery. Buckle your seat-belts, boys and girls – we’re about to embark on a journey on the Organ Trail.

Designed by The Men Who Wear Many Hats, Organ Trail is an eight-bit, primarily text-based zombie survival title which chronicles the journey of a small group of survivors across the central United States as they move from coast to coast. Over the course of the journey, you – as the leader of the ragtag band – will have to co-ordinate and manage resources, set the speed at which your vehicle moves, scavenge for supplies and fend off bandits, mercenaries, undead deer and grizzly bears; and of course, zombies.You have a number of primary resources which you’ll have to keep an eye on over the course of your journey.

Food and ammo are the two staples of any zombie apocalypse, so they’re your most important – run out of either, and you’re pretty much guaranteed to die. Equally important is scrap, which you’ll use to keep your car in top shape (it will take damage as you travel depending on how fast you go), while batteries, mufflers,and tires will be require to replace any components of your vehicle that end up damaged or missing. Last, but certainly not least, you’ve got medkits – you’ll need them to heal any damage your character ends up taking.

Resource gathering takes the form of a ‘scavenging’ mini-game, in which your eight-bit avatar will need to wander about a map gathering pickups whilst fending off wave after wave of zombies, based on the level of activity in the area at the time. In larger settlements, you can take any of a wide array of jobs for cash or resources. This basically involves several additional mini-games. Retrieval missions will set you on an obstacle course, where you’ll have to avoid (or shoot) a horde of zombies to get to a goal. Bandit missions set you up in a shootout, where you’ve got to clear a building of hostiles from your solitary point. Lastly, defense missions set you up behind a sandbag and set you to work fending off a horde of undead.

All in all, these minigames – as well as the boss battles – are a nice change of pace.

Aesthetically, Organ Trail is a rather ugly game  – this is part of its charm, truth be told. Though the graphics are quite simplistic, they fit the title very well, while the sound effects are generally fairly simple digital blips Organ Trail isn’t perfect, though. I found the shooting mechanic (which involves having to click and drag from your target) more than a little finicky, and I found it strange that no other survivors could be sent out to scavenge for supplies or ordered to help defend your camp or vehicle in the event of an undead attack.

All in all, though? Organ Trail’s a winner. It’s a healthy dose of nostalgia, and anyone who enjoyed the original Oregon Trail will definitely find familiar territory in Organ Trail. Now, if you’ll excuse me…I’ve an apocalypse to survive.