Indie Game of the Week – Terraria 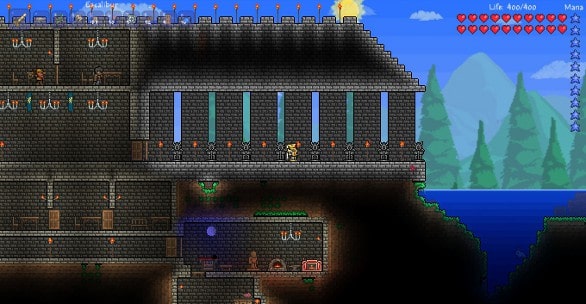 Today, I’ll be discussing another game that’s been out for a while (those of you who haven’t played it should really be ashamed of yourselves): Terraria. The best way to describe this one would be to ask you to imagine what might happen if someone took Minecraft, made it into a side-scrolling platformer, added a bunch of bosses, then injected it with a healthy dose of PVP. Yeah…it’s pretty intense.

The objective of the game is…well, it’s pretty much the same as the objective of Minecraft. Gather materials in order to build a shelter, upgrade that shelter into a city, and use it as a home base/place to hide from the numerous monsters that tend to wander around in the twilit hours of the night. After you’ve fulfilled certain requirements, NPCs will start to show up (assuming you’ve constructed shelters for them). These NPCs have a number of different purposes, though the majority of them are merchants from whom you can purchase a number of rare items. In some cases, these items are actually required to craft certain pieces of weaponry, armor, or equipment.

This equipment will, of course, be used to do battle with the game’s various bosses. Currently, there are five, each of which features an ‘upgraded’ version unlockable after defeating The Wall of Flesh (the game’s ‘final boss’). In addition, Terraria features something known as The Corruption: a creeping area of blight filled with deadly pits and even more dangerous creatures, as well as a single massive dungeon in each world.

The title’s not without its sticking points, however. Terraria’s worlds aren’t anywhere near as vast as those of Minecraft (due not in the least to the fact that, as a side-scroller, it’s limited by nature), although the largest are vast enough to keep you occupied for hours on end. Once you’ve defeated the bosses and gained the ‘ultimate’ equipment, there’s really not a whole lot left to do, either – the game sort of tends to peter out after a while, and the side-scrolling mechanics which make it so appealing also ensure that you’re somewhat limited in what you can actually build. Multiplayer is somewhat limited (there aren’t as many decent servers out there as there are in Minecraft), and the developer is no longer releasing updates, while Minecraft is still being updated regularly.

Still, it’s available for pocket change, and for a time, this was one of my all-time favorite games. I played it to the exclusion of all else, and my obsession with it was second only to my all-consuming passion for Minecraft. It’s actually a pretty awesome game, and one that I cannot recommend highly enough. Terraria definitely does have its problems, but it’s still one of the most entertaining games I’ve played, even if it does taper off after a while.

Indie Game of the Week – Terraria