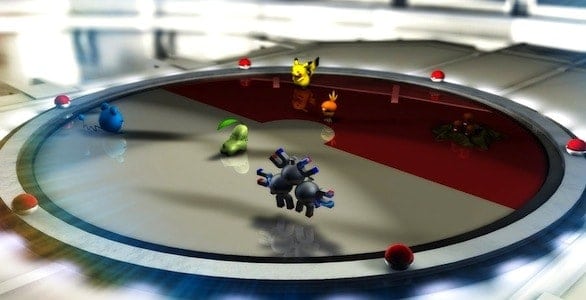 This past week brought some great news in MMO gaming, just none involving Pokemon. Luckily MMO ATK is here to once again bring you a future look at what could be the best MMORPG ever fathomed. There are endless reasons supporting the transition of such a great franchise, and our goal is to make Nintendo realize that! So before you go off needing a pokeflute, let?s jump right into Part 2 of Making a Pokemon MMORPG.

Last week I discussed how well Pokemon already fits into an MMORPG setting. One of the most fitting qualities discussed was giving fans of the series the chance to finally catch every pokemon in one game, rather than transferring them from one generation of gameplay to another. It takes a lot of time and money for developers to figure out how to build an original pet system in a massive world, which is a big reason why many MMORPGs fail to incorporate such an idea. Amazingly though, what other MMORPGs struggle to achieve has actually already been captured through Nintendo?s handheld accomplishments.

A great aspect about Pokemon already being an RPG is that there is already a level system in place for an MMO game to build off of. For starters, the MMORPG could release by placing a level-65 cap on the pokemon you train. This would give plenty of leeway to developers when wanting to improve the game in the future; moreover it would guarantee level increases in all future expansions. Placing a cap at level 65 would also assure that each pokemon is able to be captured upon game release. Zweilos has the latest possible evolution, morphing into Hydreigon at level 64. There will clearly be level restrictions placed on pokemon as players progress through the game though, so it?s doubtful that anyone would run into a fan problem like not getting their favorite three-headed dragon; so soon anyway.

There will be plenty of loved creatures to keep players occupied until finding their very favorite one. There is immense customizability when it comes to individual pokemon too. Even back when Pokemon was just on the Gameboy, fans were able to give their favorite creatures nicknames. The whole process of giving your creature an identity becomes more rewarding when sending them into battle against other players rather than verse a computer.

Differentiation of names is merely the most basic of reasons that support individual pokemon identity. Those familiar with EV training will understand how different each pokemon actually is from one another. Each pokemon has a unique nature that affects the way their stats improve at each level. Moreover, those stats are also affected by the uniqueness of each pokemon you fight throughout your journey.

Your pokemon?s information is just the beginning when it comes to individuality. One of the most sought treasures in the pokemon universe is a ?shiny? pokemon. One way to experience the visual niftiness of these rare creatures would be to allow color customizability for captured pokemon. That being said, the search for such a prize would work even better. Shiny pokemon have just one alternate color scheme, or none in cases like with Garchomp. If a change in color difference was enough to push fans to dedicate endless hours to a search for these unique pokemon, imagine the motivational drive new color combinations will generate on a daily basis.

Pokemon don?t have to be shiny to be rare; some are just hard to find. Certain pokemon stats have proven to be unbalanced over the years, but that should never make them ineligible for capture. Instead, they should just be more difficult to find and weaken. A prime example of these tough creatures would obviously be legendary pokemon. Most powerhouse pokemon, such as Mewtwo, would likely be part of the main storyline, just as they were in the handheld RPGs. Other pokemon like Regirock, Regice, and Registeel, would just be very difficult to find because of their already established involvement with storyline quests, such as awakening Regigigas with other players.

Keep in mind how each MMORPG hosts an open environment. It?s safe to assume that Nintendo would also allow at least one pokemon to follow you outside of their pokeball. Not only does this give players a way to showcase the previously mentioned customizations of their once feral friends, it also opens up scenarios of pokemon involvement devoid of the typical battle restrictions.

The most likely and concurrently amazing concept would be the aspects of mounted travel. With such hugely established gaming universes, there needs to be a way for players to eventually travel between locations quicker and with more ease. Improved methods of travel have always been implemented in MMORPGs; such has been shown with the airships in Final Fantasy XI or griffins in World of Worldcraft. A Pokemon MMORPG would obviously find a way to implement Hidden Machines (HM) to get around, such as surfing and flying.

HM utilization has always been an integral part of the roleplaying experience in the Pokemon storyline. There have been a number of HMs that have shown their practicality outside of battle from day 1, and over the years there have been a multitude of innovative additions, even including Technical Machines (TM). Erasable moves like Sweet Scent and Headbutt have already helped trainers discover pokemon using unconventional methods. Giving an impressive visualization of travel finally presents an occurrence of realistic pokemon events, that players likely imagine when seeing an 8-bit bird flutter back and forth on their Gameboy screen.

Do you think pokemon interaction will transcend handheld success into an MMORPG setting smoothly? Make sure to check back next Friday, when I discuss the possibilities, and necessity, of leveling a pokemon trainer instead of just the creatures they capture.