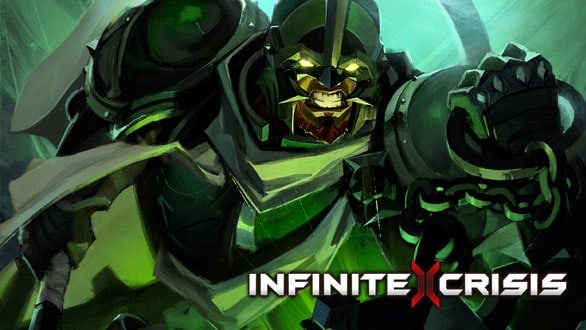 As seen on Todays Daily XP Video!
Turbine and Warner Bros. Interactive Entertainment would like to introduce the latest Champion to be added to the Infinite Crisis roster.  The new profile video shows off the Atomic Green Lantern and his bevy of new skills designed to help your team in team-fights.  The new champion is a master of support and helping defend his allies.  Some of his skills include the Emerald Lantern which deals AOE damage and vision, while also increasing attack armor of allies, and Construct Champion which creates a stained glass knight that marches forward, deals power damage and knocks enemies into the air.

Arcane Green Lantern will join the in-game line-up on September 16th.  Until then you can all just bask in the glory that is his Champion Profile Video and long for the days when you can toss emerald lanterns on your foes and shackle them together while your team comes in for a complete GG wipe.  Players who aren’t yet in to the beta for the Infinite Crisis MOBA can sign up using their beta application page.