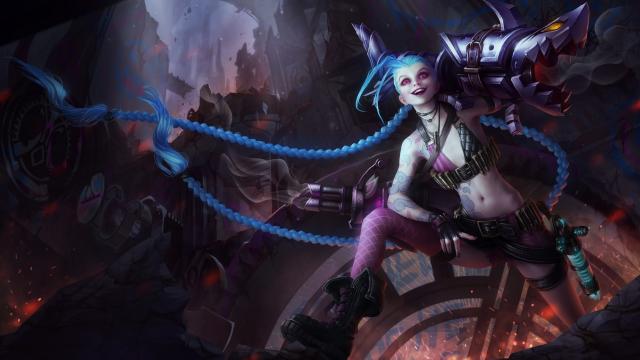 Riot Games have just released the latest reveal video for the newest Champion to join League of Legends, Jinx, the Loose Cannon. Jinx fulfills the traditional glass cannon role as she brings a unique brand of chaos to Summoner’s Rift. Using her Switcheroo ability she’s able to switch between 2 distinct weapons, Fishbones and Pow-Pow. Having both a mini-gun and rocket launcher at her disposal means she’s able to dish out quick, single-target DPS and decent enough AoE damage.

Her ultimate? The Super Mega Death Rocket, arguably the greatest name for an ultimate ability in the entire league. When activated Jinx fires a global rocket that increases in speed and damage as it travels, dealing damage to the first enemy Champion it hits and all nearby opponents. A bonus is also applied depending on the targets missing health.

One cannot argue the strength of her kit but will she prove popular enough to make a debut on this months top played League of Legends Champions? Only time will tell. You can check out the official Champion reveal video below.