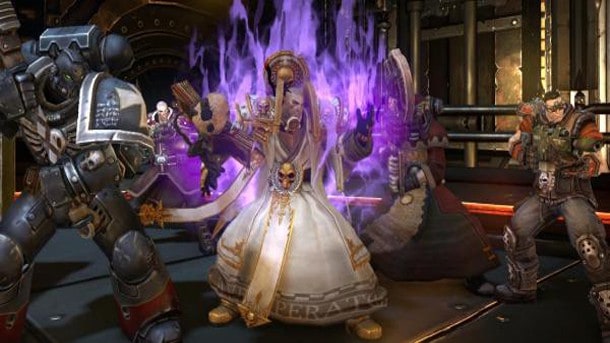 MMORPGs differ in many areas. One thing massive RPG titles have in common is a structured class system. Some games opt to put more focus on race, or merely call the class choices something different, like jobs. Regardless of terminology, there is a clear multitude of options when it comes to creating a character in a massive environment. This is Love and Hate though, so you know the drill.

There are a great amount of classes to choose from in an MMORPG; but there are also a great amount of students in a high school, and not all of them are as popular as the rest. It?s sad to say that many classes suffer from becoming a social outcast, which is ironically what many of the players partaking in MMORPGs were once considered. A number of questions arise from such a skewed balance in some character builds. Do opinions of players determine the life and usefulness of a certain class? Are developers the ones responsible for overall class balance and usability? MMO ATK once again takes on the good and bad qualities that MMORPGs have to offer, this time helping shed light on the genres complex class systems.

It may not be the most popular part of MMORPGs, but building a character can be the most rewarding process for a gamer. Choosing a race based on the class you will play can mean everything for your characters success; so making that choice can be difficult. That being said, people love creating new characters. Sometimes it?s as simple as wanting a new personality to build on. Most other times players find themselves wanting to dabble in the plethora of classes a game has to offer. Let?s not forget the road blocks you hit when reaching max class level either.

Fans of role playing merriment are lucky to have a genre as vast as MMO gaming. MMORPGs find a way to provide endless methods of success, all centering around the class you choose and the role you can fulfill when playing in a massive world. It?s quite an accomplishment when players can choose any class and still play the role they want in a game. The fact of the matter is that players will often come across people playing the same class to order to obtain the certain role they want (e.g. if you want to be the healer, you will most likely be choosing a spell caster of some sort). I absolutely love when developers find a way to allow one class to play multiple roles though.

It?s great when you can choose a mage class for example, and have that character be a healer, damage dealer, or tank depending on how they choose to play and build their character. Supposedly, no one likes tanking or healing. I don?t fully agree, but there is clear popularity in damage dealing classes. People don?t want to get locked up in a role that doesn?t fit them, but they may want to enjoy the number of classes their MMORPG has to offer.

Developers do their best to keep an MMORPG balanced and fresh. It?s great when developers find a way to introduce new classes into a massive game, allowing for people to find new ways to experience an already cherished title. It doesn?t always benefit a company to try and improve something that?s already a success though. Adding new classes can throw off the balance of an MMORPG entirely. I hate when a new class is overpowered and everyone starts playing it. It?s just as bad when new additions suffer from lackluster performances, because they are immediately unfavorable compared to already reputable classes.

A class definitely doesn?t have to be a new addition to be considered over or underplayed. Far too often do you see an MMORPG where everyone in the game looks the same as one another. I hate how certain games lead players into playing the same job, class, or champion just because it?s the most beneficial way of keeping up with other players. It?s such a shame when other classes fall by the wayside and outlive their purpose because a choice few are so much better for your MMORPG success.

So many people partake in these massive communities that it can even make some classes become obsolete because of their lack of popularity. Players who like damage dealing classes will be overlooked more often, unless they play the right ones. Far too often have players been rejected because of how many better options are readily available. ?Oh you are an Elvaan Warrior? Sorry this group only accepts Human and Dwarf Warriors because they do more damage per second.?

The problem isn?t that too many players care about the maximization of their group; it?s how intense some of those players are when expressing their dedication to that cause. Some players will reject you for not playing a certain sub class. I can?t tell you how many times I didn?t make the cut because my secondary job wasn?t a Ninja in Final Fantasy XI. ?You can?t duel wield? Your DPS will be too low!?

Some games allow a group to be composed of whatever it wants. It?s a shame when people can?t party up with their friends because they all want to be damage dealers of some sort. I?m not the only gamer that thinks the holy trinity of MMORPG groups (Tank, Healer, DPS) needs to go. Players already find unique ways to get around groups with set roles. In FFXI for example, Black Mages even created a method called Mana Burn, which allowed everyone to nuke enemies with an onslaught of damaging spells before needing the aid of a group healer.

Wanting group balance is understandable because it makes battle progression more logical. The problem is it creates a gaming environment where people force others to play roles they don?t want. The MMORPG atmosphere is so bad at times that group leaders even begin telling members how to play their characters; and when you don?t perform well, those leaders lash out on your shortcomings as if you failed your life?s mission.

Am I part of the MMORPG minority by thinking players deserve to experience a game with their friends, without being forced into unwanted roles? Or do you think more players are getting fed up with the mundane process of tank>damage>heal, tank>damage>heal? Let us know below and be sure to keep an eye out for the next Love and Hate breakdown of the MMORPG genre.