Love and Hate: The MMORPG Grind 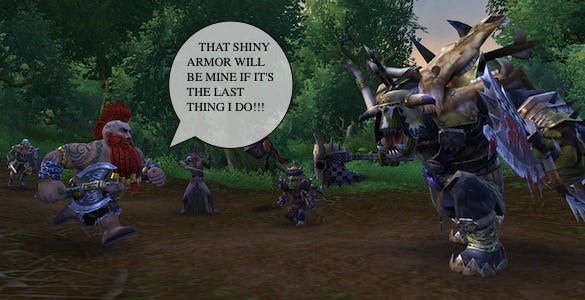 There is both payoff and regret from the farming and grinding experiences of MMO gaming. MMO ATK is here to once again tackle the topic. The last Love and Hate covered the horrible effect gold farming has on an MMORPG economy. Not all farmers are gold sellers though, so farming can?t be all that bad. Just the opposite in fact, as farming for sell worthy items and currency is often required to fund a characters journey. Grinding through endless waves of diminutive creatures often comes with the territory in MMORPGs.

In the end it doesn?t matter what you are farming or grinding through the game for. The satisfaction of online gaming boils down to what you accomplish. The players that are swimming in virtual cash and rare items because their daily grind paid off probably love farming. Those who have spent hours looking for a unique item to no avail probably hold much different views. It may be a pain to see the same thing hour after hour, but don’t neglect the beneficial end result that players achieve through such efforts.

Farming for items and gold may be a tasking endeavor, but it can also be a tool for the dedicated MMO gamer. When waiting for a group of player to form together, it helps to be able to kill time by doing something rewarding. The perk of basic farming in most MMORPGs is that it takes no real effort to accomplish, it just takes time. Gamers tend not to complain that farming is too difficult but instead refer to it as being too boring.

Entertainment value aside, farming can be a great way to make progress in your favorite MMO game without having to really pay attention. Part of my obsession with Final Fantasy XI in high school was how easy it was to farm for Beehive Chips while doing my homework. My brother?s school work even improved because of the amount of study time he put in while doing mundane grinding. Countless friends have even mentioned getting through unwanted reading while waiting for a group to form in their massive world.

MMORPGs aren’t obligated to grant easy progression, but it shouldn?t take forever for players to accomplish moving forward. Who actually enjoys grinding? There is already a natural grind when it comes to massive online gaming. Forcing players to redo the same thing numerous times just makes them want to quit the game. Farming to access better items is a different matter, because players choose that grind. Grinding for levels on the other hand is just torturous to the average player. It?s even worse when a player has to fight twice as long because their class can?t solo as easily as some others; but we can discuss class imbalance next week.

Make sure to check back with the Love and Hate series soon for an in depth look at class builds. Leave a comment to let us know if you enjoy the grind of leveling, farming, or both. If you are with the majority of gamers on the other hand and hate the grind of some MMORPGs, be sure to share your opinions and stories below.

Love and Hate: The MMORPG Grind