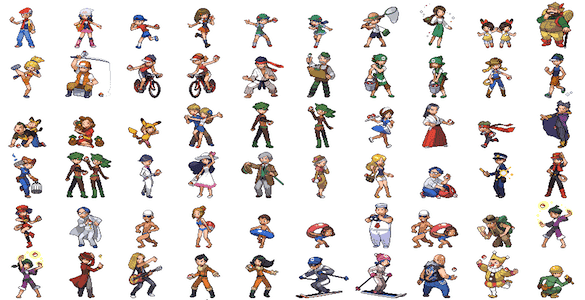 Week after week, Making a Pokemon MMORPG tackles the obvious and obscure qualities supporting the creation of a massive pokemon universe. The franchise has undeniable success in the gaming industry and would undoubtedly continue that streak with a massive internet presence. Last week’s article discussed what it would be like to finally give players a chance to customize their trainer. The featured MMO ATK series also promised to extend the discussion, by bringing the many professions in the Pokemon world to life.

The Pokemon series has done a wonderful job at portraying real careers through the utilization of pokemon abilities. The games have also spawned professions solely built around the famed creatures, such as a Professional Pokemon Trainer, Pokemon Ranger, and Pokemon Breeder. It?s clearly time to let players experience what it means to be something like a professional Pokemon Breeder by giving them a massive community to do it in.

Those who have experience with the Pokemon series tend to breed their own pokemon eventually. True fans become Pokemon breeders at one point or another, spending ample game time trying to hatch that very special buddy. Players tend to be very picky about the nature and statistics of their newborn pokemon, so there?s not much downside in giving professional Pokemon Breeders an advantage in achieving those goals. This doesn?t even begin to cover the abundance of skills and professions that would be possible just from being part of the MMORPG genre.

Professions give players a way to apply their unique passions to the game. Are you looking to use your creative skills? You could become a Pokemon Chef, preparing the most delicious and stat boosting pokemon foods found in the game. Maybe you?d prefer a different craft like Kurt from Pokemon Gold and Silver, learning to create Pokeballs from apricorns. Either path would be a great choice because both allow you to sell your achievements to other players.

Maybe you?re not the type of player fit for an indoor profession. Why not use HM04 and Surf your way into Pokemon Sailing? Why not take up Pokemon Archeology, scouring the globe for evolution stones and rare fossilized pokemon? You may not even want fossil pokemon, but you can be sure other players will. Don’t forget how important a trading system is in an MMO community.

Do none of these ideas float your boat because you are a hardcore trainer with a hardcore lineup of pokemon? Take up a battle orientation like archery to increase the damage and distance of your pok?mon?s ranged abilities. Remember how much stronger Ash?s Primeape was in the cartoon when it trained correctly for hand-to-hand combat? Why not be a Pokemon Sensei and guide your team to melee combat greatnesss. Loyal Pokemon followers worldwide are already discussing the highly anticipated possibility of improving individual pokemon moves.

The more skilled you become at your profession, the more it will impact the uniqueness of each individual pokemon move. Imagine having a more accurate Dynamic Punch available in your pokemon arsenal. The brutal assault would confuse more than just your opponents pokemon. You can even choose a type specification and stand out as the type exclusive trainer you?ve always wanted to be. Congratulations psychics of the world, you can finally be taken seriously.

It?s clearly time for there to be a Pokemon game where training your pokemon isn?t synonymous with just grinding for levels. Players will be uniquely detailed and not just another carbon copy of Ash Ketchum. There are a handful of other professions yet to be mentioned that will surely deliver one of a kind pokemon experiences.

What do you think? Would a crafting or profession based system work in a Pokemon MMORPG? The most interesting profession to consider would be one of organized crime, which will be discussed in next week?s article. It is a controversial idea, involving many questions; but there is no use in ignoring the brilliant ideas a Pokemon MMORPG would offer.