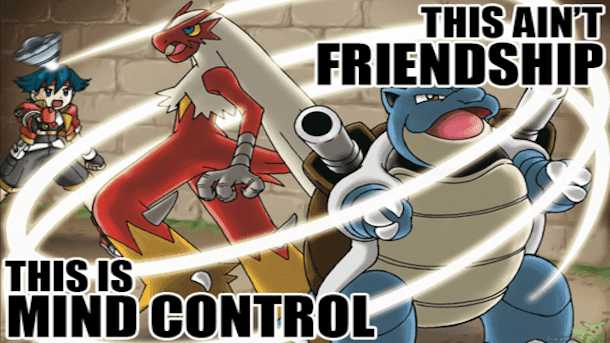 Week after week MMO attack delves into the many topics supporting making a Pokemon MMORPG. There are already a handful of articles supporting the future online endeavor, but you can be sure we?ve only just begun. This week picks up where I last left off, discussing the character choices in a massive pokemon universe. There is a final frontier of pokemon and human interaction I have yet to cover though, and that?s Pokemon Rangers.

Pokemon Rangers are different than trainers in that they don?t actually capture multiple pokemon. Instead of using pokeballs to build a team of buddies, Rangers use a device called a Capture Styler to ask wild pokemon for temporary assistance. Players will be accompanied by a dedicated pokemon partner at most times anyway, but this is a great way to utilize the abundance of other creatures that a massive world would have offer.

The path of a Pokemon Ranger would have its own distinct storyline, just like a path of organized crime would. What Rangers will lack in pokemon ownership will be made up in their questing, almost tenfold. Unlike trainers, Pokemon Rangers will search the world for specific pokemon; utilizing creatures for the sole purpose of the quest that?s active at the time. Linking wild pokemon to quest events creates many unique scenarios.

Some events for example may require odd prerequisites that don?t seem worthwhile, such as needing five Bidoof in your party to get passed a unique bush. The people likely to complete this quest are the players who can catch five Bidoof in an event area because they happen to have 5 slots open in their party. This won?t happen very often. The only other person who could probably do those quests is a Pokemon Ranger, because they can ask for the aid of wild nearby Bidoof without capturing the little weirdoes.

Quests for a Pokemon Ranger won?t be limited to one area either. What if a player needed to accompany a mother Venasaur across a number of zones to reach her litter of Bulbasaur? That player would temporarily have a Venasuar in their party without ever needing to train the pokemon?s prior forms. Not only would players have a cause behind defeating NPCs along the way, but they?d be able to partake in memorable PvP experiences with others players they encounter.

Along with a unique quest list, Pokemon Rangers would probably be granted unique abilities affecting pokemon battle and travel. Rangers are also known for having different Capture Stylers. Expanding on Stylers could supplement in-game crafting for other players and create more social connections in a massive online community.

Bear with me through this final idea. The ideal setup of a Pokemon MMORPG would be in a fixed world. If this were true, it?s plausible that Pokemon Rangers could enroll to protect certain regions. With pokemon crime and abusive NPC trainers existing in a massive world, players could create camps and set their home points in a multitude of areas. Players can already build bases in MMO games; so why not let Pokemon Rangers do the same for the good of the ecosystem?

Balancing an ecosystem is the most intriguing and difficult idea of this entire Pokemon Ranger topic. Take a specific location. The Safari Zone for example. Everyone wants to catch a Tauros, so let?s say Nintendo were to place an invisible ?capture line? of 10 on them. For this example we can say 100 Tauros spawn in the Safari Zone each day. There are obviously too many greedy gamers in MMORPGs to keep that ?capture line? of 10 from being crossed, and as a penalty only 99 Tauros would spawn the next day. As players abuse an ecosystem, they will see a decline in available pokemon.

These penalties would continue until the spawn rate for Tauros decrease all the way to the ?capture line? of 10, forcing players to only catch that many per day. What then could control such a difficult process? Pokemon Rangers certainly could! A player could take pride making their soul purpose to be a Safari Zone Ranger. Pokemon Rangers would square off in intense PvP battles against Pokemon Trainers to keep them from catching Tauros once the ?capture line? is met for the day. Some days may be harder than others, and that?s why the amount of pokemon spawning per day will fluctuate in each area.

Not everywhere needs the touch of a Pokemon Ranger, but Nintendo shouldn?t overlook the concept if they introduce an MMORPG. This is simply another amazing way for fans of the series to enjoy the experience of a massive Pokemon universe. Maybe the character paths mentioned in recent articles won?t work perfectly in an MMO setting, but let us know what you think. How appealing would the temporary pokemon usage actually be for fans? Make sure to check back each week for more on what Nintendo could be doing for their fans.