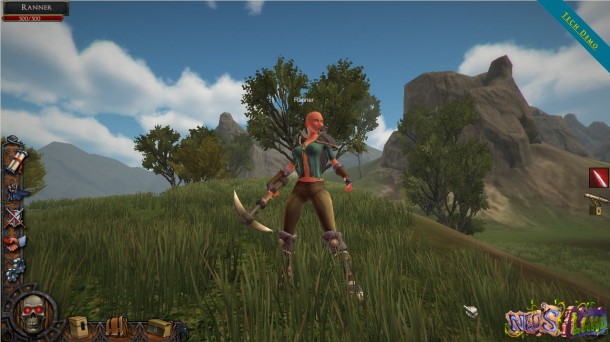 As seen on Todays Daily XP Video!
I browse Kickstarter on an almost daily basis but it’s very rare for me to discover an MMO game that’s actually worth getting excited about. Sure Star Citizen recently exploded in popularity and achieved $18 million in funding, but it’s not quite the game for me. Something that has really peaked my interest is the recently revealed Neo’s Land. From the information on the Kickstarter page the game appears to combine the freedom and features of EVE Online and Ultima Online with a proprietary game engine and UNITY 3D graphics.

The features list for Neo’s Land is one of the most exciting I’ve seen on a Kickstarter project. Real-time housing with completely customizable buildings, allowing players to construct homes, shops and other businesses, all without instancing yourself away from the game world. Create your own dungeons and challenge players to steal your loot, build a house boat and become a pirate of the seas. The possibilities within Neo’s Land are restricted only by the ideas of the community, which is basically an endless pool of awesome potential.

It’s not uncommon for developers to boast community involvement but very few MMO games have come close to the promises laid out by Neojac. These aren’t just empty promises either, they’ve already hosted a number of Round Table events with the community, each offering the opportunity to contribute to current mechanics and suggest new ideas.

For more information, including videos on the Round Table events, you can visit the official website. I’ll be pledging my support to Neo’s Land on Kickstarter and if you want to do the same, click here.