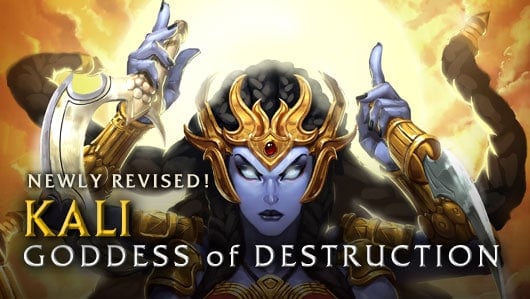 The second of a double dose of MOBA character updates lands today as Hi-Rez Studios announce the release of the reworked Goddess of Destruction, Kali. One of the most controversial God’s in the game was long overdue a makeover and makeover she has received has Hi-Rez Studios has introduced all new animations, abilities, character cards and character models.

Accompanying the new-look Kali with this weeks update is a new Gold Skin for fan-favorite Odin, and an exciting selection of festive skins. Wreck the Halls Fenrir, The Jingle Hel and Bacchus Father Chrismash are all now available to purchase for a limited period.

Amidst the current flood of problems experienced by gaming YouTubers Hi-Rez Studios are a shining light as they reveal their full support for usage and monetization of SMITE footage. You can read more details and request written permission here.