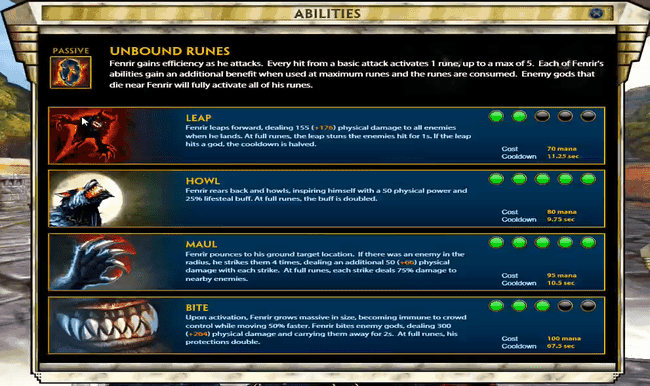 The eSports manager for Hi-Rez Studios, HiRezBart, has just finished live streaming a pre-release reveal for one of the most anticipated gods coming to SMITE, Fenrir. You’ve only got to look on the official forums for a few minutes to find dozens of threads discussing the potential addition of the popular Norse god. It was less than 30 seconds into the stream before people complained that Fenrir attacks in a two-legged stance over that of the highly requested quadrupedal stance.

His passive ability, Unbound Runes, is a stacking passive ability that scales with Fenrir’s auto attack. Holding up to 5 charges Unbound Runes adds additional effects to each of his abilities, including added stuns, lifesteal and more. The stacks remain at full until Fenrir uses an ability.

Leap is Fenrir’s bread and butter ability. It launches him towards a target location damaging all enemies in the area. At maximum passive stack Fenrir also applies a stun to all enemies he hits, reducing the cooldown by half it he comes into contact with an enemy God.

Maul is his next ability and gives him yet another leap. A far shorter range than his previous ability but if Fenrir is able to hit an enemy God with the Maul ability he instantly strikes 4 times, adding a 75% AoE if used with full runes. It has also been confirmed that Maul works with on-hit effects, making it a vital ability for a quick lifesteal option.

Fenrir’s ultimate ability, the rather mundanely named Bite is anything but. Activating Bite sees Fenrir grow in size, become immune to crowd-control and move 50% faster. Bite can also be used to pick up enemies and carry them off for 2 seconds, additional effects with full runes will double Fenrir’s protection stats.

Bart used the Jungle Practice map to display Fenrir’s abilities which makes it very difficult to judge his potential due to the poor scaling of minions and the Fire Giant. However, his abilities speak for themselves and there already people creating some very interesting builds. Fenrir is expected to release before the weekend.

Hi-Rez Studios have said that the numbers, stats and names of Fenrir’s abilities are subject to change.