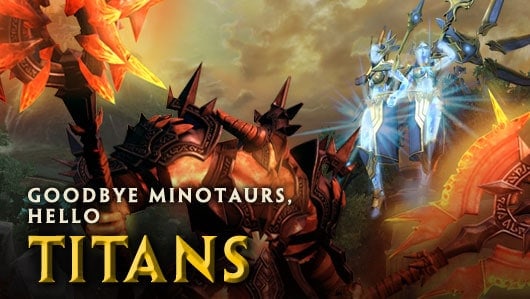 As seen on Todays Daily XP Video!
Hi-Rez Studios released the latest update for SMITE yesterday, introducing a brand new face to the most popular game mode in the free-to-play MOBA, Conquest. The new update sees the iconic Minotaur go the way of the dinosaur as Hi-Rez Studios introduce 2 new NPC’s to the Conquest map with the debut of the Titans.

Two new Titans have been added to defend the base of each team in Conquest. The Titan of Chaos and Titan of Order will now appear in place of the Minotaur as part of an ongoing process to revamp the Conquest experience – offering a much needed fresh take on the popular game mode.

The latest patch also sees Sun Wukong receive the golden treatment while Anubis fans can sink their teeth into the new Stargazer skin. There’s also a huge list of changes made to each individual god, arguably one of the biggest to date. For additional information on all of the changes click here.