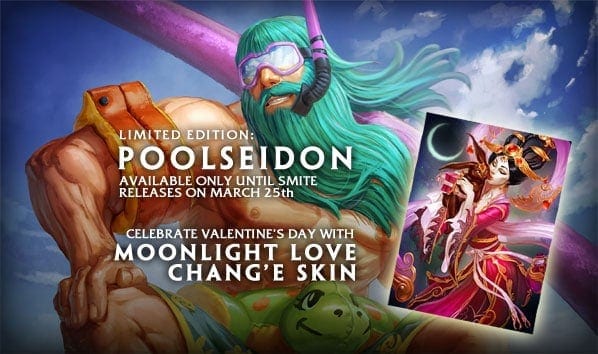 As seen on Todays Daily XP Video!
Today Hi-Rez Studios launched a sexy new trailer for one of their SMITE gods.  No it’s not Aphrodite with her radiant glow, or Athena and her sexy wisdom, it’s Poseidon.  But this time, he’s wearing a onesie.  The Poolseidon limited edition skin shows off the natural beauty of Poseidon as he lays out by the pool, sipping on a Mai Tai.  His weapon of choice, a water noodle and a giant inflatable duck.

So why are they making a fool of Poseidon?  Well, it’s a very special limited edition skin, only available for purchase until SMITE’s official release day, which is March 25th.  After that, it will never be available again.  In addition to having one of the rarer skins in the game, Hi-Rez will contribute an additional $5 from each purchase to the SMITE Launch Tournament prize pool.