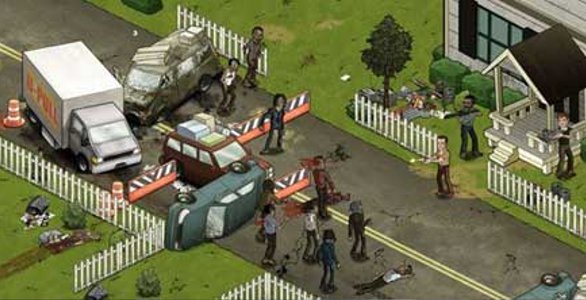 A social game based on the AMC horror series The Walking Dead is rumored to be coming in April. AMC is partnering with social entertainment company RockYou to provide a social gaming experience for what they call, mid-to-hardcore gamers. The idea is to allow ‘core gamers to battle zombies, with win or lose consequences, but on a more flexible and popular social platform.

In The Walking Dead Social Game, the goal is to fight for survival after the apocalypse by fighting walkers (zombies) and keeping yourself and your fellow survivors alive. Scavenging for resources and establishing camps based on settings from the show will also be a key part of the game. The Walking Dead Social Game will allow players to have their own, unique adventures, with opportunities to encounter show characters at key moments suggested by the show?s narrative.

?AMC’s The Walking Dead Social Game is a next generation game for social networks.? said Stephen Griffin, CEO of Eyes Wide Games, which is the studio developing the game in conjunction with AMC and Rock You. ?It’s got deep playability. It’s got drama, and it’s still approachable for the casual audience. However, if you’re a gamer and you’ve been looking for a deeper game to play and to experience on social networks then this is it.?