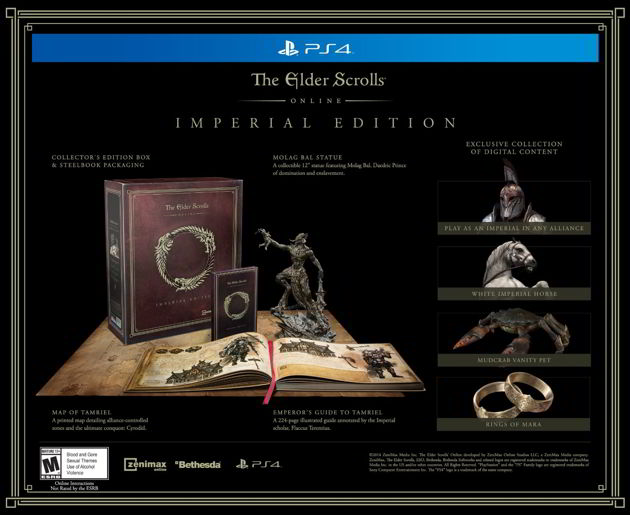 As seen on Todays Daily XP Video!
UPDATED: A new post via Bethesda’s official blog has officially announced and confirmed the Imperial Edition of The Elder Scrolls Online. The super fan bundle will be made available in digital and physical format and has been confirmed for all platforms: PC, Mac, PS4 and Xbox One.

This official reveal will serve as a relief to many fans who were led to believe that the Imperial Edition could be a PS4 exclusive, considering Sony’s newest console was the only platform listed in the leaked Amazon image. Contents of the physical bundle include everything listed in the original story below as well as a five day early access bonus for the PC/Mac versions.

Any fans interested in the limited edition bundle can place their pre-order at participating retailers or through ESO’s official store. The digital edition will be available for $79.99 while the limited quantity physical edition can be purchased for $99.99. ESO will release on PC/Mac on April 4th, 2013 and will follow up on PS4/Xbox One in June.

Original Story: A new image has been discovered on the Amazon servers hinting at a possible limited edition version for the upcoming Zenimax Online Studios MMO with The Elder Scrolls Online: Imperial Edition. The Imperial Edition image leak suggests that players can purchase a special edition for the PlayStation 4 that comes with a variety of added incentives both digital and physical.

The physical goodies include a 12″ statue of Molag Bal, a Collector’s Edition box and steelbook packaging, a map of Tamriel and a 224 page guide. Digitally players would be treated to a White Imperial Horse, a Mudcrab vanity pet, two Rings of Mara and the opportunity to play as the Imperial race in any of the 3 factions that will feature at launch.

There’s very little information outside of the actual image itself and Bethesda have yet to make any official comment on the matter but with recent reports stating that the PlayStation 4 version will not require a PSN subscription to play, there’s a good possibility that Bethesda and Sony have agreed to an exclusive edition on the PS4 console.