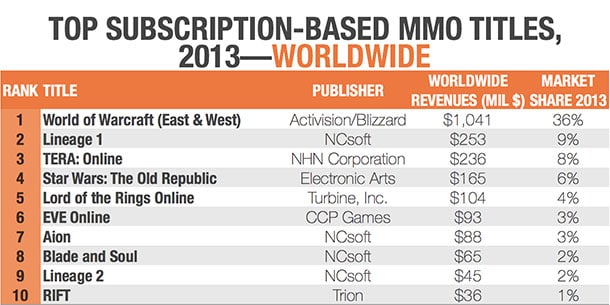 Today Super Data Research released their US digital games market update for June 2014.  Their topic this month was subscription based MMOs (pay-to-play), and how the market is shaping up on the heels of the releases of Bethesda’s Elder Scrolls Online and NCsoft’s Wildstar.  The full report is available to you to read via the link above, but it’s interesting to note that even though there has been a decline in both players and total revenues for subscription based MMOs, the average revenue per user continues to rise.  Free to play alternatives are quickly becoming the go-to for many MMO players, and the market has come into a mature phase, with revenues expecting to stabilize over the next few years.
[heading]Top Subscription-Based MMO Titles, 2013 – Worldwide[/heading]

It comes as no surprise, looking at the chart above, that World of Warcraft continues to be the most popular subscription-based MMO.  What may surprise you is that Lineage shows up as number 2, despite the fact that NCSoft shut down the North American servers back in 2011.  The game is the most popular MMO in Korea, which must explain their spot in the rankings.  The top five round out with TERA Online, Star Wars the Old Republic (not labeled) and Lord of the Rings Online.

The pay to play MMO market has been on a slow and steady decline since 2010, when there were about 30 million active monthly subscribers to various games worldwide, to the numbers we see this year at about 23 million.  Revenues, however, have been offset by several key titles incorporating, or switching entirely, to a micro-transaction based revenue model.  Microtransaction revenue has roughly doubled in the past five years, from 14% to 27%, while the average spent has tripled from $16 to $46, so despite an overall decline, the category has managed to maximize their ability to monetize the shrinking player base.

What i’m most interested in hearing about is next years numbers.  With two new huge titles entering the market with a subscription-based model, it will be great to break-down what kind of numbers they can pull.  Early signs so far are good as initial numbers from both Elder Scrolls Online and Wildstar have shown strong numbers to start their careers.