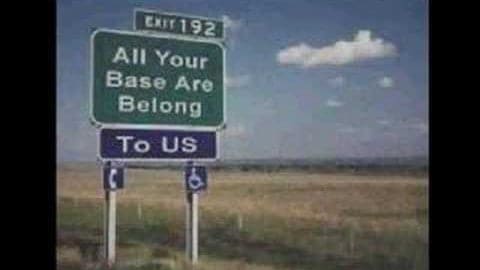 I’m here today with some extremely important news. Fair warning folks, this revelation might well floor the lot of you. Alright…here goes nothing: video games are kind of a big deal now. Shocking, right? Are you surprised?

I remember a time when gaming was still the domain of people who primarily moved about the fringes of ‘ordinary’ society. Even then – back when the Internet was arguably still in its nascent stages – people were carefully picking and choosing elements from games and the culture surrounding them, re-framing them in an amusing light then sharing them with everybody who might possibly be interested (and probably quite a few people who had no clue what the hell they were talking about). Today, we pay homage to some of the best, the funniest, and the most memorable memes in the industry.

All Your Base Are Belong To Us

https://www.youtube.com/watch?v=8fvTxv46ano
Let’s start with a classic. Arguably one of the first gaming memes ever created, this one traces its origins back to the hilariously, legendarily terribad Engrish translation present in the European Zero Wing’s opening cutscene. Back when it was first released, the game was mocked for a time and received lukewarm reviews. Gradually, it faded into the annals of gaming…that is, until it was rediscovered back in 1999, on the Something Awful Forums.

A single animated gif was posted depicting the introductory sequence of the title. That gif quickly exploded into a cultural phenomenon which still remains with us to this day, over a full decade later.

Yet another meme born from gaming’s early days, the phrase “you have died of dysentery” was a curiously common one in the educational title “Oregon Trail.”  Known for being notoriously difficult, the resource-management title tasked players with leading a caravan westward in the Pioneer days of the United States. The phrase itself was a stock explanation for the death of the player character, which made it all the more memorable.

Everybody who’s spent the last month or so ridiculing Microsoft’s rather pathetic showing at E3 2013 seems to be forgetting one very important fact: it wasn’t that long ago that Sony was the butt-monkey of the expo. The phrase “Giant Enemy Crab” is from 2006 – a year that Sony’s PR department was evidently off getting baked while the rest of the organization prepared for their showing.

During the conference, the producer of Genji: Days of the Blade took the stage to begin babbling about the action game, boasting about its historical accuracy and the fact that it’s “based on famous battles which actually took place in ancient Japan.”

Then he came out swinging with a giant enemy crab, because as everyone knows, they were a staple of military tactics and strategy in ancient Japan. Of course, he hadn’t embarrassed himself enough quite yet. Oh, no. he went on to proudly gush that his new game included real-time weapon switching, and that your weapons could be used to attack the crab’s weak-points for “massive damage.”

Mudkip, for the uninitiated (in other words, those of you who never had a childhood), is a water-type pokemon which made its first appearance in Pokemon Ruby and Sapphire. This adorable little creature – which sort of looks like what you’d get by gluing a few seashells to a very confused frog – apparently endeared itself to at least a few people, because shortly after the release of the game, someone on DeviantArt created a community known as the MudKipClub. They immediately set to work recruiting new fans into the fold…by going to every single page they could find and posting the comment “so i herd u like mudkips.”

4chan took to the phrase almost immediately, and one anon began circulating a story about a young man who may, perhaps, have liked mudkips just a little too much. As with most things that begin on 4chan, the tale quickly spread from one corner of the ‘net to another, and Mudkip, bless its tiny heart, quickly became an Internet legend.

https://www.youtube.com/watch?v=LkCNJRfSZBU
As anyone who played vanilla World of Warcraft will be quick to tell you, instances back then were damned serious business, especially the 40-man raid. A single mistake by any of the participants at any point during one of these grueling endeavors could (and often did) lead to a full party-wipe. As a result, most groups that took raiding seriously had it down to a science. This try-hard environment would eventually give birth to a fellow named Ben Schulz. Along with his guild, “PALS FOR LIFE,” Schulz made the trek into upper blackrock spire, where they decided to have a little fun at the Rookery (known as one of the hardest segments of the instance).

The video that resulted from their antics has become legendary both within the World of Warcraft community and without, and has gained so much popularity that Blizzard has actually acknowledged Jenkins with official merchandise.

The League of Draven

I’ll spare myself the effort of explaining what League of Legends is to you folks – unless you’ve been living under a rock, you already know. Instead, I’m going to explain who Draven is. Known as The Glorious Executioner, he’s probably the most dramatic, arrogant, and flamboyant champion released to date (I’m including Taric and Ezreal in that list). He’s a total narcissist, an entertaining character, and a devastatingly powerful ad carry in the right hands. That’s not what’s made him a meme, however. It’s what he says when he’s selected:

“Welcome to the League of Draven!”

What can I say? Something about it clicked. What’s more, somehow this catch-phrase has spawned an odd trend where players take the splash art of other champions – and even real-world photos – and replace all faces with that of the executioner.

https://www.youtube.com/watch?v=PkuLj5uCgSk
I’ve never much been a fan of military-styled first-person shooters, because they all-too-often devolve into the tale of Lieutenant Captain Badass vs. The Vaguely Ethnic Evil Foreign Army.  The “Ramirez! Do Everything” Image Macro is the embodiment of this trend, poking fun at Call of Duty: Modern Warfare 2’s Private James Ramirez, who is essentially expected by his superiors to be a one-man army throughout the game. One mission, known as “Wolverines!” is particularly bad for this: Sergeant Foley gives Ramirez a total of 65 scripted orders over the course of the level.

So, yeah. Ramirez pretty much does everything.

https://www.youtube.com/watch?v=MkoA2Ja0KoE
Brazilians don’t have the best reputation in the world of online gaming, as the video above clearly indicates. It’s tough to say exactly why, truth be told: objectively, they’re no better or worse than anyone else on the ‘net (at least in theory). Somehow, they’ve still managed to garner nearly much hatred as Jack Thompson, particularly in League of Legends, and their onomatopoeic means of representing laughter – “huehuehuehue” – has become a siren call for trolls everywhere. See also: Morde Es #1 Brasil.

Alright, to be fair, this meme didn’t technically spawn directly from anything within a game – though it did still come from 4Chan. It
s origins are simple: at some point in the past, an anon made a simple post with a picture of Halo’s Master Chief attached. It read “I think Halo is a pretty cool guy. Eh kills aleins and doesnt afraid of anything.” That’s pretty much all there is to this one – 4Chan took it and ran with it.

Since I’m a completely unapologetic Minecraft fanatic, I couldn’t complete this list without including at least one entry from that game. It was kind of a toss-up between this entry, Herobrine, or Minecraft Guy. Ultimately, I decided to go with the most amusing. See, in the default game of Minecraft, you start with literally nothing. Your first task, then, is to find a tree to punch down, so that you can make some tools. Naturally, it didn’t take someone long to come up with the moniker “punch trees, get wood.” It’s kind of become an immortal saying; one which will always be associated with Minecraft.

https://www.youtube.com/watch?v=nSAL5VyQTMQ
I think that video speaks for itself, don’t you?

Honorable Mention(Because I’ll probably get lynched if I don’t mention them): Arrow to the Knee, The Cake Is A Lie, Geddan, Guile’s Theme Goes With Everything, in ur base killin ur dudes, Slowpoke, The Peta Pokemon Parody, Lavender Town Syndrome, Ash Pedreiro

Got any memes you think should be included on this list? Let me know in the comments!