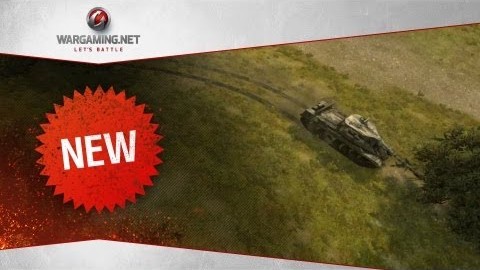 Wargaming has announced its new update for the free-to-play MMO, World of Tanks. The update will mark a face-lift for the game and will introduce a new game engine as well as other features and content.

The 8.0 Update will add critical features to the game such as realistic tank movement physics, as well as some game rendering improvements. The enhanced renderer will bring lifelike splashing and water wave effects, as well as improvements to shading for medium and high preset graphics.

A variety of other additions and improvements include an emblem and inscription customization, adaptive camouflage, mini-map functions and an enhanced tech tree interface. For the first time in the game, players are able to transfer free experience to crew experience and select the battle mode that they wish to play.

Not only that, but the new Update 8.0 will feature new tanks with the Soviet tech tree expanded to include five new robust tank destroyers: SU-122-44, SU-122-54, SU-100M-1, Uralmash-1 and Object 263. On the British side, they will also benefit from the introduction of the tech-tree?s first premium machine ? the famous Matilda Black Prince experimental medium infantry tank.

?We?ve been working hard on implementing new physics for the game for quite some time,? said Sergey Burkatovskiy, Lead Producer for World of Tanks.

?This update is a huge milestone for the team. The improvements and enhancements will really change the way players experience World of Tanks.?