The developer behind World of Tanks, World of Warships and World of Warplanes, Wargaming, today announced an exciting new partnership with Paymentwall as the team bolster the selection of payment methods with an additional 150 alternatives to credit and debit cards. Gold, premium access, vehicles, ships, tanks and aircraft from the Premium Shops across Wargaming’s … Read more

Wargaming has announced their plans to join in on Military Appreciation Month for the 5th consecutive year as they reveal plans to help raise up to $100,000 for charity in World of Tanks. Previously the developers used a simple donation feature to raise the cash but this year the team are mixing things up a … Read more 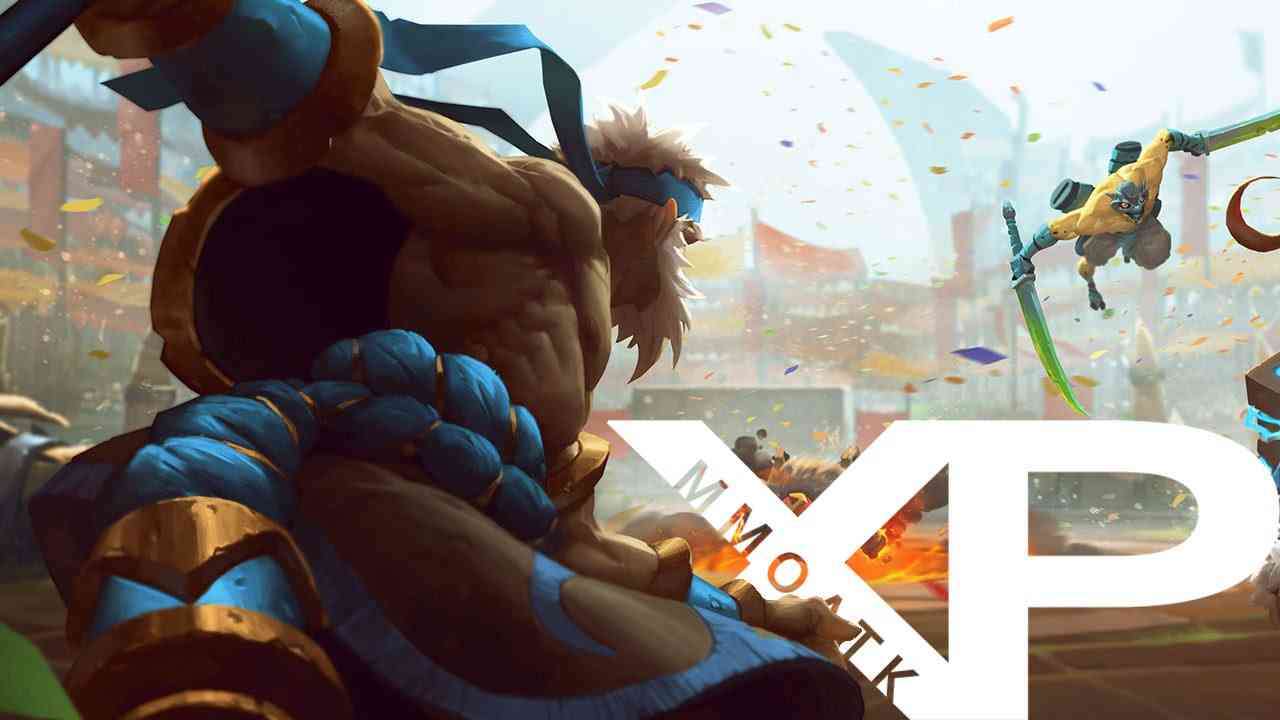 What’s up Attackers! Kirk here with your weekly block of MMO news. On today’s episode we have Battlerite, Black Desert Online, Rising Thunder, Skyforge, Albion Online and much much more! Actually take one one of the Much’s. Just much more! The XP, starts now!

Stunlock Studios announced this week that they have teamed up with Sanctum and the Goat Simulator developers Coffee Stain Studios to create Battlerite, a new, “TEAM vs TEAM brawler” that is intended to be Bloodline Champions’ spiritual successor. All “random elements” have been stripped from the game’s mechanics. It boasts short, intense matches and a high skill ceiling. A diverse cast of characters promises to give rookies and veterans alike a character they can comfortably play. In addition there will be a so called “fan system” that will allow a form of direct interaction with spectators that are part of the crowd. Players will be able to win the crowd, even if they don’t win the battle. The trailer does not show too much, aside from four champions, and excuse me, I never played Bloodline Champions, but it looks like it may only be 2v2 based on what we see here. You can find more information on the official website, but i’ll give you a quick rundown. It shows only four different champions: Croak, Shift, Freya, and Ashka, One different map, but question marks indicating at least two more, and that’s about it. Cool logo, and name actually. Battle rite.

Dam will be increasing Black Desert Online’s server capacity soon. As we saw via a tweet this week from Black Desert Online to a fan who complained that their server was ridiculously overloaded. Many players share the same resentment, with random disconnects to t he game, lag issues and mob spawn issues, which totally ruin any chance for enjoyment. The Tweet doesn’t give any additional information as to when it might be happening or to what capacity, but at least they are aware of the grief issues that the game is causing fans and are working on fixing those.

Radiant Entertainment this week announced via a newsletter to all of us Rising Thunder alpha participants that their action fighting game from ex-Capcom combat advisor Seth Killian will be shutting down on March 18th. Why may you ask? Well, besides the game being .. meh .. the studio was acquired by none other than Riot Games! Oh man, why would Riot buy them? I dunno, maybe Riot is working on a Fighting Game and they want it to Feature League Characters and they just want to get a head start? Or maybe they are just dicks and want to kill off new free to play games before they get off the ground. Probably the first, but .. I dunno. The newsletter did mention that the dev will be re-assigned to a new game that they are incredibly excited about. I guess we’ll know soon enough.

It has been about a month since Skyforge’s last major update, March of Knowledge, and Allods Team has announced another update called Dark Omen. The update will see an overhaul of Operations. Operations will be shorter in length and the “top players” will be allowed to skip them. Players that make it to one million tokens will now have access to a new progression bar. The Elder God questline will be introduced. Players will be tasked with “[learning] what it takes to become an Elder God” while continuing to fight off Mechanoid Invasions. Additionally, Pantheons will be given an option to merge together. Regardless of the size of the respective Pantheons, they will be able to combine both their members and resources into one larger Pantheon. AND The invasion symbol interface will be streamlined during the update. They will be given their own interface in order to make it quicker and easier to select them. As part of this update, invasion symbols will no longer be reset when you reset “‘regular’ symbols.” Also there was a new Knight Trailer released earlier this month, which you’re watching now. More information about the update—including the full patch notes—is set to be revealed as March 16th draws nearer.

We’ve been talking about Albion Online for what seems like forever now, and the team continues to amaze and excite as the nearly year long beta continues on. The latest upcoming patch called Cador will introduce a new death mechanics, mobile repairs, and zone-based fame and loot bonuses. The new death mechanic prevents instant death. It is explained that instant death mechanics caused issues for groups, making content even more difficult for the surviving members of the group when a member is killed and resurrected far away. Now, players will be knocked out first. And they must be continuously attacked in order to be killed—however, not all mobs will be interested in killing them. If their health points regenerate to full or someone resurrects them while they are knocked out, they will be able to get back up. A new item, the “Repair Kit”—will allow players to repair their items on the go. Rather than always having to do it in town. Repair Kits also cost more than a “full-fledged repair station” and have a limited amount of durability. Also, Fame and loot bonuses are now increased based on the zone. Green zones will allow you to reach “the highest Tiers of progression,” but your progress will be slow. Yellow zones and their Hellgates will grant 50% more fame and loot. Red and black zones and their Hellgates will grant a full 100% more fame and loot.

World of Tanks Update 9.14 is here and it is focused on refining the current user experience with refined physics, sound, and models. Vehicle physics have been improved significantly, so much so that players can now “skid, slide, flip tanks upside down,” and perform various other maneuvers. The sound engine has been ripped out and replaced with Audiokinetic Wwise (which, I’m not sure if it’s a typo or what). Sound is now said to be “processed on a different core,” allowing 10-30 unique sounds simultaneously. A new set of sounds recorded using “authentic vehicles at a real proving ground” have been introduced alongside the new sound engine. Additionally, 24 of the tanks have been given HD models and a new map set in war torn Paris called “Ravaged Capital” has been introduced. You can find the full patch notes on their website!

That’s all I’ve got for you today. Next week i’ll be at GDC, so I may or may not get a video out, or maybe i’ll do one from the hotel room, who knows, depends how I feel. Thanks for watching, see you guys soon!

Wargaming today announced that their conquest of the gaming world continues as the recent release of World of Tanks on PlayStation 4 has been met with a hugely positive response as over 1 million players have downloaded the game since the January 19th release. PlayStation 4 players have been enjoying the platform exclusive features provided … Read more

Wargaming are proud to announce that the highly anticipated launch of World of Tanks on PlayStation 4 has arrived, bringing with it the awesome and intense tank combat that has made both the PC and Xbox versions so popular. The 15v15 tank combat game includes a number of features exclusive to the PlayStation 4 version … Read more

Wargaming continue their conquest of the free-to-play MMO world with the announcement that the award-winning World of Tanks will be marching its way onto PlayStation 4 on Tuesday, January 19th. The new version has been built specifically for the PlayStation 4 and will incorporate many elements exclusive to the platform such as DUALSHOCK 4 functionality, … Read more

Xbox 360 and Xbox One players will want to dive into Wargaming’s World of Tanks over the festive period as the developers announce a new variety of holiday themed content and a new combat mode for the increasingly popular free online MMOFPS game. The update will arrive later today and will see the return of … Read more

Console gaming fans of Wargaming’s free-to-play tank combat MMO, World of Tanks, should be sure to download the exciting new Update 2.3 today as the developers introduce a wide variety of exciting new content including the debut of a brand new game mode, new specific ops for PvE, 3 new enhanced maps and the opportunity … Read more

TJ Wagner, a member of the team responsible for bringing World of Tanks to the PlayStation 4, today announced that they are very excited to reveal that the action-packed 30 player combat MMO will be heading to the PlayStation 4. [quote cite=”TJ Wagner, Project Lead at Wargaming”]I’d like to personally invite you to join the … Read more

The battle lines have been drawn as Wargaming proudly announce the immediate release of the critically acclaimed World War II tank combat MMO, World of Tanks, on Microsoft’s Xbox One gaming platform. Custom built for the Xbox One the latest World of Tanks harnesses every inch of power for the hottest gaming console on the … Read more

Wargaming, the developers of the critically acclaimed World of Tanks MMO, and Google today announced an exciting new collaboration project that offers tank enthusiasts the chance to explore the most iconic vehicles on two tracks in combat history. Have you ever wanted to get first-hand experience as a Centurion thunders its way over rough ground … Read more

Having previously announced the World of Tanks Xbox One release for July 28th developers Wargaming took the legendary E3 as an opportunity to reveal additional details on the release schedule surrounding their premier online title. The most exciting element of the new details revealed at this years E3 is that both the Xbox One and … Read more

Wargaming today announced the beginning of the highly anticipated event for the World War II themed combat MMO, World of Tanks, with the start of Domination. Commanders brave enough to take on the challenge have been invited to enlist at the earliest convenience as the Domination event is a limited-time opportunity and is expected to … Read more

Award-winning developers Wargaming, the team powering behind the likes of World of Warplanes and World of Battleships, today announced an exciting event to commemorate the 70th anniversary since the ending of World War II with a series of rewards & prizes for the World of Tanks community. If you’ve been chasing that ever illusive addition … Read more

Over the weekend Wargaming deployed the latest update for their European and North American World of Tanks‘ players with the release of the eagerly awaited Updated 9.5. While Korean and and Asian players will have to wait until the end of the year, the West can get their hands dirty immediately with the additional of … Read more