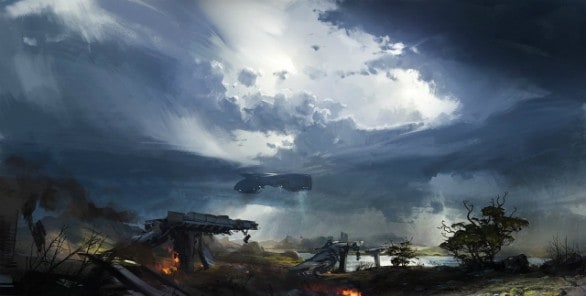 An EVE Fanfest Keynote and two panels later, a wealth of information on highly anticipated first
person shooter DUST 514 is here! From map generation to player role specialization, a lot has
been revealed so far in this year?s conference.

For those unfortunate enough to have missed EVE Fanfest and much of the streamed content,
CCP have been busy in explaining to EVE fans exactly how DUST works, how it has been built
and how players will interact with it and each other. Gathering what was discussed in the Day 1
keynote, as well as panels, ?Role on the Battlefield? and ?Seeding the Universe?, these are the
features and goals of DUST 514 development that have emerged:

Terrain
Battlefields have been broken up into districts in which the battle ensues. These districts
are huge – 5km by 5km hexagonal maps – all with varying conditions. Surface infrastructure
and planet climate will determine the type of terrain that players will encounter. These areas
will have urban centers as well as player structures which also differ depending on map
elevations, geographical placement of infrastructure and other planetary conditions. With the
variance in structure size and type, weather conditions such as rain and electrical storms, and
environments such as grass fields and deserts, CCP hope that each district will be very unique,
and create an immersive and individual experience with each match.

At the moment, CCP are hoping to implement changes to the currently standardized physics
surrounding gravity, as well as making weather conditions affect gameplay. Currently, only
temperate planets have had maps generated, although they are considering how to include lava
and plasma planets in the future. Wormholes may also be making their debut at a later stage in
the game?s ongoing development.

Universe
Considering the map proportions, it is amazing that CCP have found a way to place 10 to 20
maps per planet. Now, with an expected starting DUST 514 universe of over 7,000 planets, this
makes for a very, very large number of maps. And the number of planets are expected to rise in
the future. Additionally, CCP are trying to make it possible for EVE pilots to be able to see from
space that a district on a planet is currently in battle.

Corporations
Corporations play a large part in the game. Within low security and null security spaces,
corporations will own and inevitably defend their districts on each planet. This also means they
will have the ability to hire mercenaries to fight for them on contract. As CCP want to make this
game accessible for both casual and hardcore players, casual players will also have the ability
to play within high security space with NPC-given missions and objectives, as well as engaging
in player versus environment scenarios.

EVE players will also have the ability to control orbital bombardment weapons in space. In
this exciting development, DUST mercenaries will be able to call on allied EVE pilots to fire on
ground units when in times of strong resistance. However, use of these weapons is restricted

to low and null security space. So getting into a mercenary contract or finding a system with the
right conditions will allow for much more exciting matches for DUST mercenaries.

Mercenaries
As a DUST 514 player, how you effectively use your skills and role will be most beneficial for
your success as a mercenary. Each player will begin with the same type of initial militia skills
as well as gear. Starter items include the assault dropsuit, assault rifle and Locus grenade.
As you progress in the game, players will then have the ability to form their roles through the
specializations they choose. In this case, rather than picking from the start a sniper or scout
role, players can learn to realize the need for vehicle specializations or a squad leader role.
This will also likely effect player?s contract possibilities as certain roles will be in demand by
corporations depending on war requirements.

In terms of skilling up, players will have a very large skill tree to choose from, which includes
both passive and active skilling. It?s understood that to take on all skills would require the
equivalent of over 7 years of training, something already very familiar with most EVE players.

Game mechanics
The matches are intended to be as immersive as possible. Battles so far have been tested with
24 player teams on each side, however it?s reported that these tests have gone well and team
size will likely increase in the future.

The resupply of items is a much more arduous task. For invading teams, supply posts must
first be hacked in order to be able to call for items. Other objects such as vehicles need to be
purchased and airlifted to the fields for use, rather than magically appearing as they do in many
first-person shooters. As such, tactics, timing and organization are going to be key to success.

Player communications will exist for the purpose of teams being able to better formulate
strategies while in the midst of battle, while voice and chat systems will be shared with EVE
Online so that allied forces will be able to communicate. Players will also be able to access
live 3D maps of the field to better position themselves and the team, while access to calling for
orbital bombardment on a painted target is designed for dealing with strong resistance against
opposing forces and other tactical strikes.

It?s all a lot of information to take in, and this has been simply some of the more standout
features that will be appearing in DUST 514. The game is certainly shaping up to be an
incredible experience, with many comments from fans stating how they feel this may be their
go-to shooter of choice.

Even though CCP seem to have covered all their bases, it appears they still feel there is plenty
of work to be done, with more features and elements they would like to incorporate. Going by
their record with EVE Online, DUST will be a game that is constantly in development. An FPS
that?s forever getting better? Yes, please!