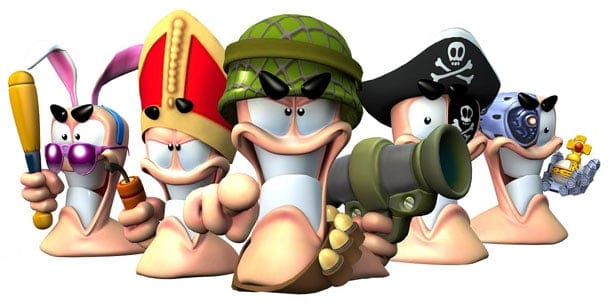 Everyone has played Worms, or at least some version of Worms.  Since the series’ debut in 1995 there have been 19 or so releases / re-releases / versions of the game.  With the continued success of the Worms franchise comes the inevitable ‘copy-cats’ who want to cash in on the popularity of the game.  Some Worms clones have been quite lackluster, but there are a few worth noting.  These Worms-like games come in all shapes and sizes, some can be considered MMOs and others are just for the worms.

If you are the type of player who wants to play Worms but doesn’t want to pay for Worms, then Gunbound is the choice for you. Gunbound resembles Worms in almost every fashion down to the cartoony graphics and awesome sound effects. Gunbound has been around for a while and most fans of 2D turn based tactical shooters have at least heard of it, which contributes to quite a large player base that will always have you ready to play the next game. Matches are fairly quick and with a large amount of items in the shop, there’s plenty to keep you coming back again and again. Gunbound is a game that everyone should add to their arsenal.
[play-now=http://gunbound.softnyx.net/]Play Gunbound Now![/play-now]

Teeworlds is another game that has ben out for years. The game maintains a certain degree of popularity because they are consistently adding new content to the game. The graphics leave a bit to be yearned for, but with such a small download size and availability on Mac, Linux and PC, there are plenty of ways to jump into the game. Some of the cool things about Teeworlds are the ability to create your own unique looking character, design your own maps and the ease of jumping right into the game and playing. The game’s graphics are clean, clear and simple and there’s no wasted space on the screen with menus and pop-ups that you won’t ever use. Give Teeworlds a try Worms fans, you may find a healthy alternative to your turn based addiction!
[play-now=https://www.teeworlds.com/?page=downloads]Play Teeworlds Now![/play-now]

Hedgewars is another multiplatform, free turn-based blast-em-up game in the vein of Worms. The game features a wide range of weapons, a multitude of maps and really great graphics and audio thrown in for the ride. As has been mentioned before, the popularity of Worms has spawned a variety of clones and Hedgewars is one of the best clones out there to date. One of the most difficult things about Hedgewars is the AI. The CPU opponent is wickedly accurate even with the most seemingly-impossible shots. That’s not a deal-breaker though because it offers a real challenge that is oh so rewarding when you get a win.
[play-now=http://www.hedgewars.org/]Play Hedgeworld Now![/play-now]

I don’t want to sound like a broken record here, but since this is a list of games that are like Worms, it’s hard not to. DDTank is another 2D turn-based tactical shooter where angling the perfect shot amongst variable conditions will ensure your victory. DDTank does take the genre one step further by adding a few RPG elements like item buffs and the earning of equipment to boost your avatars. Gameplay is quite easy to learn but difficult to master. DDTank offers a few gameplay modes that are great for both casual players to the most competitive. Two game modes and support for up to 4 players make DDTank an excellent choice for fans of Worms.
[play-now=http://www.aeriagames.com/playnow/ddtus]Play DDTank Now![/play-now]